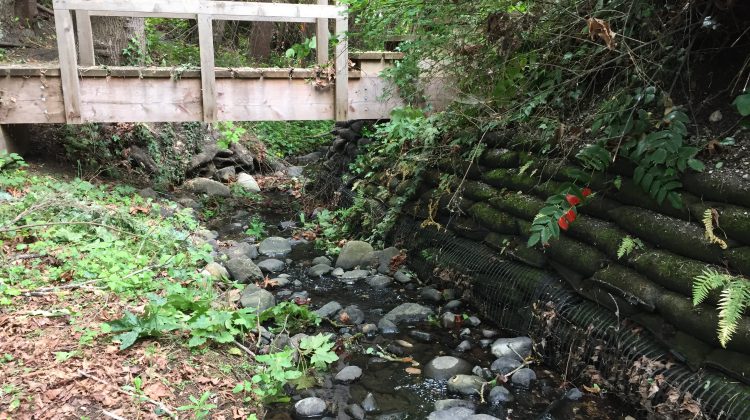 COMOX, B.C.-Comox resident Ken McDonald has launched a $260,000 lawsuit against the town.

The suit is for damage to his property on Jane Place due to erosion from municipal stormwater.

“It began in 2016 when we were made aware by one of our neighbours that the problem that is… causing the erosion to the banks of our property is stormwater from the town’s stormwater management system,” explains McDonald.

“Thirty percent of our property is back here (behind his house),” McDonald said. “So what I did, is I took B.C. assessed value of our house , and I said 30 percent of it’s been lost because of the stormwater. And I feel that’s a reasonable justification because they’ve essentially taken away the use and enjoyment of our property and also created a safety hazard for our grandchildren.”

He claims all of the rainwater from the district north of the town, together with the town, “is dumped directly, without any detention, into the creek” located behind his property.

McDonald said the stormwater dramatically changes the composition of the creek’s water.

“In a forest, when it rains, only 10 percent of the water flows directly into the stream,” he explained. “Ninety percent is absorbed by the soil, by the trees, and by the plants.”

But in a heavily developed urban environment like downtown Comox, where McDonald’s house is located, McDonald said the rain “has nowhere to go,” and “it’s funneled into gutters, into down spouts, into weeping tile, and it goes directly into the storm system and into the creek.”

McDonald said this has caused the volume of the creek to increase by six times what would normally be in a forested environment.

He said large volumes of water that flows rapidly “accelerates the process of erosion by many, many times.”

“So what would normally take 100 years would happen in less than 10 years in an urban environment, so stormwater erosion is a huge problem,” McDonald said.

“So that’s what has happened here, and it’s happened for decades.”

McDonald said the previous owners went to the town in 2005, with concerns over eroding banks behind the property.

He said the “problem continued.”

Another issue, McDonald said, is pollution. A 2018 report from a retired biochemist that McDonald commissioned showed that, from samples taken from the creek, levels of fecal coliforms bacteria was 230 times higher than the limits set by the provincial government.

As well, the cadmium, copper, mercury, and aluminum levels were several times higher than the maximum allowable, according to the report.

When McDonald and his wife purchased the property in 2015, they knew there were erosion issues.

“But we’re from Alberta, we didn’t know anything about the Town of Comox or the stormwater management system, we assumed that it was a natural creek and we thought, ‘isn’t this lovely, to have a beautiful creek in our backyard.’”

McDonald said after the first rainfall, “all of the filth from town gets washed into this creek… and it flows sudsy and brown. It looks gross and disgusting, you can’t see the bottom. It’s brown and cloudy, and it’s full of heavy metals, and it’s full of fecal coliform bacteria. It’s like a toilet flushing, every time you have a rainfall after a dry period.”

He said the back of the home is unsafe for his grandchildren because of threat of trees falling on them due to erosion, and pollution from the creek.

The MyComoxValleyNow.com newsroom has reached out to the town for comment.