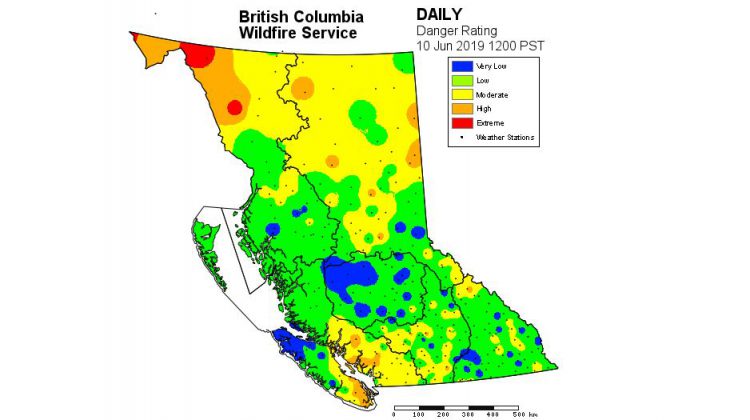 The June 10 interactive fire danger map, from BC Wildfire. (supplied by BC Wildfire)

VANCOUVER ISLAND, B.C. – The Read Island wildfire is now 27 hectares in size and is still considered out of control.

This is according to the latest update from the Coastal Fire Centre.

Information officer Donna MacPherson noted that the wildfire was reported on Friday afternoon, and was sparked by lightning.

There were 53 firefighters and five helicopters assigned to the fire today.

MacPherson said the fire is smoldering in a heavily wooded area.

“It’s in an area that has a very, very heavy canopy, which is why the crews were having a little bit of trouble figuring out the size of it,” she said. “This is just a ground fire, so it was underneath the trees and they thought it was bigger, but now it’s 27 (hectares).”

Skimmers were having difficulty dropping water through the heavy canopy of trees to the ground where the fire is burning, MacPherson added.

“(The fire) is out of control but we have 20 percent containment on it,” she said.

A bit of rain over the weekend helped tame the fire.

Since April 1st, there have been 39 fires in the region, slightly above the average of 33 wildfires at this time of the year.

Of those fires, 38 have been human caused.

Meanwhile, cooler weather has moved the fire danger rating in Coastal Fire Centre, which includes Vancouver Island and the Sunshine Coast, to low and moderate in much of the region.

The northern tip of the island, including Port Hardy, sat at a low risk rating as of 1:00pm this afternoon. On the other side of the ledger, the southeast section of the island and an area in the Sunshine Coast are at a high danger rating.

MacPherson warned that a heat wave is around the corner.

“While we’re still allowing campfires, we want to remind people that a campfire is small, it’s a half-a-metre by a half-a-metre in size, so we’re not talking about a bonfire or a pallet fire,” she said. “They have to make sure they are beside it (a campfire) and they have to put it out cold when they leave the area.”