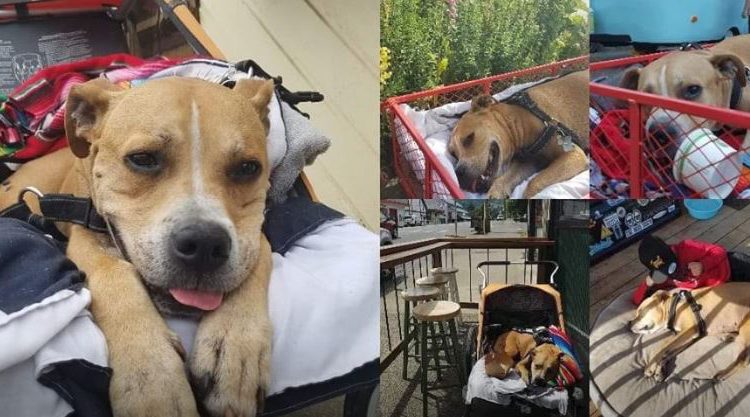 CUMBERLAND, B.C. – Turbo’s journey is over.

The eight-year-old pit bull was put down Tuesday, after facing medical challenges stemming from a ruptured disc in his neck.

His owner Casandra Rogers started an online fundraiser on Thursday, and it quickly generated just over $2,800 for vet bills. Combined with personal donations from friends and family, roughly $5,000 was raised to help save Turbo.

“That was awesome because I was able to make the down-payments on the surgery,” Rogers said. “And that went towards his other costs, as well.”

But Turbo’s injuries were more serious than previously thought, and Rogers made the heart-wrenching decision to put her beloved friend down.

Turbo’s passing will leave a hole in his hometown of Cumberland, Rogers said. She noted that he was a canine ambassador for his breed.

“He was the village favourite,” Rogers said. “He had a really special aura about him. People that have never really liked dogs before just gravitated towards him, and he changed a lot of people’s minds on the perception of a pit bull, and he loved, loved, loved kids.”

Turbo was very patient with people, added Rogers. “He would stand there and wait for you to come pet him. He wasn’t a pushy dog. He was just calm.”

Eight small tumours were found in Turbo’s lungs and he had a baseball-sized tumour in his throat that changed the shape of his esophagus.

Turbo also had a tumour surrounding his spine at his shoulders that had eroded his spine so badly, that “the tumour was basically holding his head on his shoulders.”

The neck injury that Turbo suffered two months ago started his spiral. The injury caused nerve and/or spinal column damage which caused paralysis in his legs, so could no longer walk.

Rogers said the neck injury is what started the tumour on Turbo’s back, causing it to grow rapidly.

Rogers said on the fundraising page that the surgery would have cost $10,000.

She was hoping to get 500 people to donate $20 each in order to get Turbo walking again.

Putting her beloved dog down has been tough for Rogers, who has owned the dog since he was a puppy.

“Super shocked because the vet initially in his clinical tests was very positive because Turbo still had a lot of reflexes in his feet,” she said, from Langley. “It’s quite shocking but I’m with some friends that I have known for 20 years, (she) came with me through the whole process and I’m just going through the motions right now.”