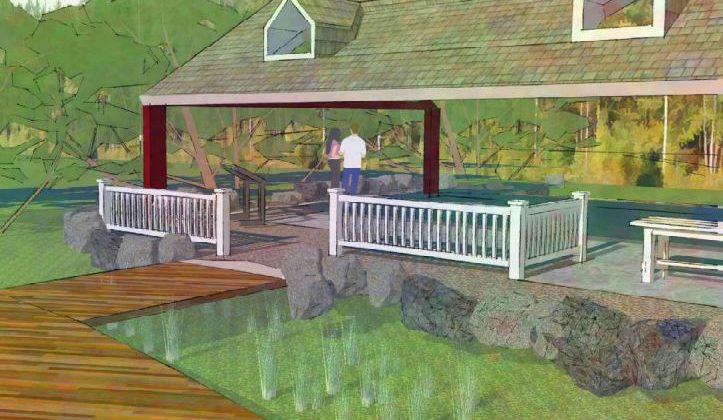 A drawing of the proposed Shakesides viewing platform at Mack Laing Nature Park. (supplied by Outlook Engineering and Landscape Architecture)

K’ómoks First Nation is having its say on the design of the Mack Laing viewing platform.

The two groups had what the town called a ‘robust conversation’ about the  platform at Mack Laing Park.

Discussion included suggestions on how to incorporate a First Nations theme into the design.

This included the possibility of changing the steel support structures to cedar poles.

Another suggestion was the inclusion of totem poles to signify K’omox First Nation occupation of the lands before Shakesides was built.

The town’s original proposal to the court was to disassemble Mack Laing’s former home, Shakesides, and use the money from the trust to construct a viewing site/platform in its place.

The final design for the proposed viewing platform came from feedback gathered from a public meeting/workshop on March 27.

Some of the features of the re-design includes:

However, the Mack Laing Heritage Society is pushing for the preservation of ‘Shakesides’ with the intention of converting it into a nature house.