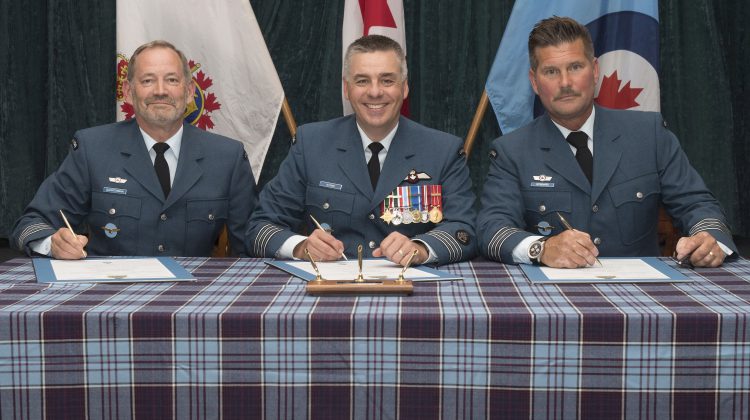 Quartermain was named as a Royal Canadian Air Force Honorary Colonel during a ceremony on July 4th at 19 Wing Comox.

Honorary Colonels are part of the Air Force “family.”

They may be former Air Force officers or distinguished Canadian citizens, hailing from a diverse range of backgrounds, including many well-known public and community figures.

He was welcomed by Jeff Stibbard, chairman and CEO of JDS Energy.

Stibbard was appointed as Honorary Colonel of 19 Wing Comox in June 2016.

National Defence says during his three-year appointment, Stibbard was an ardent supporter of 19 Wing and the Royal Canadian Air Force (RCAF).

Quartermain said he looks forward to advancing the interests of 19 Wing.

Honorary Colonels are “honorary and advisory” but are, in effect, officers in virtually all respects except operations.

They may mentor the Commanding Officer and members of the unit, help build relationships with other units through the Honorary Colonel network and aid in ensuring the maintenance of customs and traditions.

“By their very presence and name, they build and develop community support for their units by providing a public profile — a public face — for the unit,” National Defence said.

“Perhaps one of their most important attributes, however, is simply the time they spend with all members of the unit, no matter what their rank or position, just as a highly respected member of the family would.”

19 Wing, comprised of numerous squadrons and units, appointed its first Honorary Colonel in 2002.