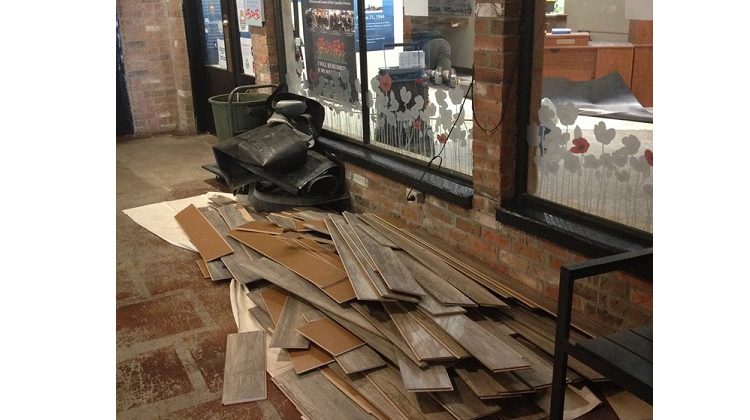 The HMCS Alberni Museum and Memorial needs your help.

Last week’s heavy rain led to a flash flood at the Cliffe Avenue building. The museum says it was “inundated.”

The good news is none of the museum’s artifacts or fixtures were damaged. The bad news is the floor was ruined and has to be replaced, and the museum’s insurance doesn’t cover it.

The museum is part of the Alberni Project, which was founded in 1999.  It’s dedicated to preserving the stories and history of the men who served on HMCS Alberni during the Second World War.

Since its inception, the project has expanded from a simple website memorial to a year-round travelling exhibit, a registered non-profit society (TAPS), and a year-round museum and memorial (HAMM) in downtown Courtenay.

Alberni was a Flower-class corvette that was sunk on August 21st, 1944 in the English Channel while escorting a convoy. She was the first ship sunk by an experimental German submarine, U-480, which is believed by many to be the world’s first stealth submarine. Alberni slipped below the water in less than a minute after she was torpedoed. Of her 85 crew, 59 lost their lives.

You can help out with the repair efforts at the HMCS Alberni Museum and Memorial by making a donation at its GoFundMe page. The museum is hoping to raise at least $10,000 to cover the damages.