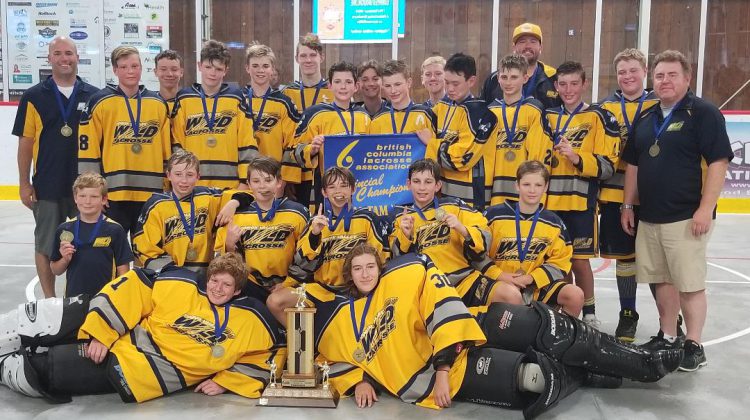 The Comox Valley Wild Bantam B Lacrosse team defeated Penticton in the final to take home the gold medal.

The team played five games in the tournament and won all of them.

In the first game, they faced their rivals from Nanaimo, the Island Timbermen. The Wild also competed against the Ridge Meadows Burrards, the Penticton Heat and the Sunshine Coast Rapids.

The Wild walked away with an overwhelming 8-1 win over Nanaimo in the first match up. In the second game, The Wild won 8-7 against the Ridge Meadows Burrards with a late shorthanded goal that was deemed the game-winner. In games three and four, the Wild went up against teams they had never faced before, something Head Coach Geoff Garbutt says was fun to do.

After defeating both the Penticton Heat and the Sunshine Coast Rapids, the Wild would face the Heat once again in the final. The Wild took no penalties in the final game and were able to hang onto a 3-2 win.

Coach Garbutt says the team worked hard to get that gold medal.

“It was a great experience, the kids came so far in the three months that we played lacrosse, we played a team, won as a team, and it was just an excellent experience.”

Not only did the team win the gold medal but one of the players, Adam Bailey, was also named the Bantam B Warrior MVP. Coach Garbutt adds that the kids did an amazing job this year.

“As a coach, it feels great to see our players come together and be successful…we certainly accomplished our goal and we’re so proud of our players on how much better they got throughout the season.”

“It gets better and better and we’re looking forward to next season for sure.”