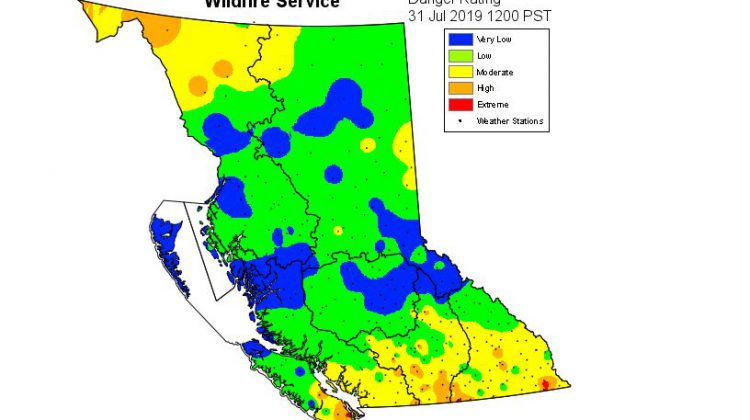 BC Wildfire fire danger rating map as of August 1st, 2019. (Supplied by BC Wildfire)

What a difference a year makes.

A cool and rainy July is good news for the Coastal Fire Centre region.

Since the wildfire season started on April 1st, 108 fires have been reported in the region.

Last year at this time, that number was 130.

Fire Centre information officer Jeanne Larsen said the fire destruction in the region is small in comparison to 2018.

Up to today 307 hectares have burned. That’s a fraction of land compared to this time last year, when 136,970 hectares had burned.

“Huge difference between last year and this year, solely based on the dryness and the drought we experienced,” Larsen said

Mother Nature has also played a big part in lessening the fire danger rating, which ranges from moderate on the sunshine coast to low or very low in parts of Central and northern Vancouver Island.

“The cooler weather and the rain has really reduced it,” she said. “A large portion of our entire fire centre is in the low to very low category.”

Even so, a Category 2 burning prohibition is still in place. This includes backyard or debris fires, and any kind of burn barrels.

Campfires are still permitted, for now.

And while the wildfire risk is low, Larsen reminds people to stay vigilant this long weekend.

“There’s going to be a lot of people out in the fields during the long weekends,” she said.

“If people aren’t careful with their fires now over this long weekend, we’re going to have what we call hangovers or holdovers. They won’t show up til the weather dries out a little bit and we can still get fires later on from activities that take place this weekend.”

She urges people to be very careful, not leave their campfire unattended, and be sure to put it out completely before they leave the area.

There are currently five fires in the region that are not considered out, but they are small.

Some are either spot-sized or half a hectare.

“Crews are currently working those and we don’t anticipate any issues with them,” Larsen said.