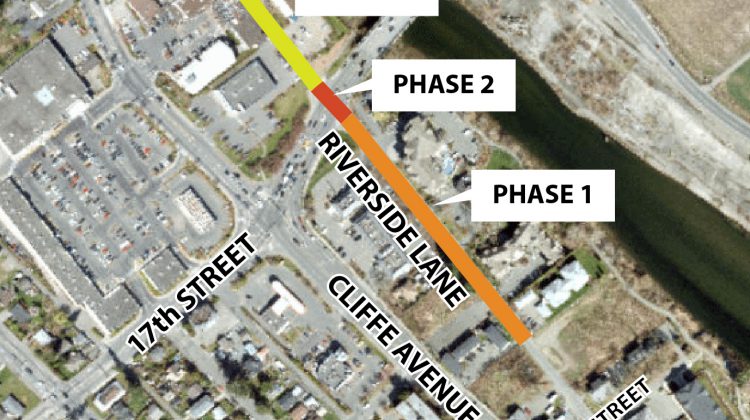 Traffic will be impacted as contractors add a second sewer line along an existing line on Riverside Lane near downtown Courtenay. (supplied by the city of Courtenay)

It’s soon going to be a slow go for drivers around 17th and Cliffe Avenue.

Traffic will be impacted as contractors add a second sewer line along an existing line on Riverside Lane.

The project will increase the sanitary sewer capacity in the city.

Work will take place on Riverside Lane between 14th Street (Standard Park) and 19th Streets, from early August until late 2019.

The expected work times were developed after consultation with area businesses and the Ministry of Transportation and Infrastructure.

Work on 17th near the bridge will be take place at night to reduce traffic disruptions.

At least one lane of traffic will continue in both directions at all times.

Street parking will be restricted within the work zone during construction times.

The Contractor will help with regular curbside garbage and recycling pickup as required.

The city says flaggers will direct vehicles, pedestrians and cyclists within the work area.

This project was made possible in cooperation with the Ministry of Transportation and Infrastructure.

The construction contract was awarded through an open public competitive tendering process.

The city notes that since this work falls within a known archaeologically sensitive area, “appropriate permitting has been obtained, and the site will be actively monitored during construction.”

A separate similar project nearby on 20th Street is expected to start at a later date, with a different contractor.

Schedules will be updated as work progresses. Click here for www.courtenay.ca/riversidesewer  for up-to-date project information.