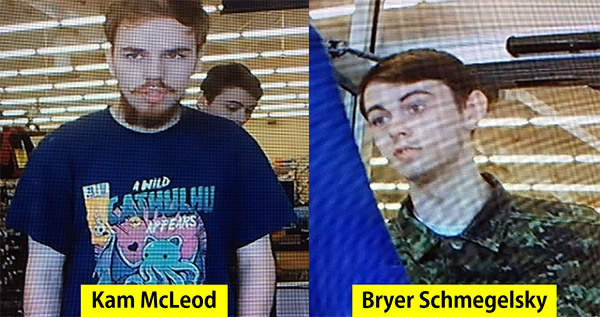 Kam McLeod and Bryer Schmegelsky are wanted by the RCMP in connection to a trio of deaths in Northern BC, (supplied by the BC RCMP)

GILLAM, MB- The search for two murder suspects from British Columbia is likely over.

The Manitoba RCMP announced today that two bodies, believed to be those of Bryer Schmegelsky, 18, and Kam McLeod, 19, were found along the shoreline of the Nelson River this morning.

The bodies were located roughly eight kilometres from the burnt vehicle the pair had used to travel to the Gillam area.

Schmegelsky and McLeod were charged with second-degree murder after the death of Vancouver man Leonard Dyck. They have also been named as suspects in the deaths of Chynna Deese of North Carolina and Australian Lucas Fowler.

The announcement comes after specialized RCMP teams began searching high-probability areas around one kilometre from where items belonging to the pair were found on the same shoreline.

“Our officers knew we needed just one piece of evidence to move the search forward & on Friday, August 2nd, the items found on the shoreline of the Nelson River & directly linked to the suspects, enables officers to narrow down the search,” read an announcement from the Manitoba branch.

Autopsies are now being conducted to confirm the identity of the bodies.