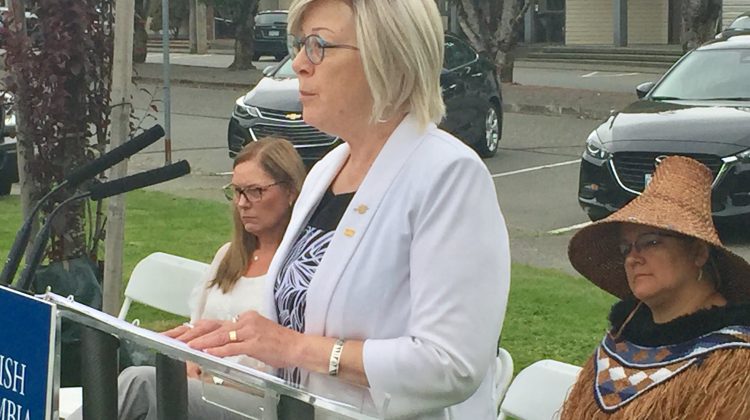 Women and children fleeing violence have a new refuge in Courtenay.

A new women’s housing project has opened downtown. The four-plexes include eight new two-bedroom units for up to 16 women and children.

The province provided $2.4 million to the Comox Valley Transition Society towards the project and will provide annual operating funding of $53,000. Women and their children moved into the homes in July.  Residents pay monthly rent ranging from $570 to $965.

“They’re fully occupied,” Ney said. “And women directly from Lilli House were able to access (them) and be moved in.”

Over the past year, 273 women and children stayed in Lilli House, a shelter for women escaping violence.  Some were there for as long as seven months due to a lack of safe and affordable housing. Lilli House has been full as many as 302 nights a year.

“Just this morning our domestic violence officer was in my office and telling me that she was able to get a woman and two children into Lilli House yesterday and had we not had the opening of these eight units a couple of weeks ago, they would not have been able to get into the transition house,” Ney said. “This new project is very significant and a huge contributor to the increased safety of women and children in the Comox Valley.”

Courtenay-Comox MLA Ronna-Rae Leonard noted that the new housing will ensure women and children who are leaving violence will get the help and safety they need.

“Everyone has the right to feel safe in their home and in their community,” Leonard said. “But we know that women face violence every day in B.C. Women and children who escaping abuse need a safe and secure place to live and support so they can heal. No one should be faced with the impossible choice of returning to a violent home or risking homelessness.”

The project is funded through the Building BC: Women’s Transition Fund.

The fund, a $734-million investment over 10 years, will build 1,500 transition, second-stage, and long-term housing spaces for women and children leaving violence, and will increase the number of women’s housing units in B.C. by 63 Percent.

More than 340 of these new homes have already been announced in 14 communities throughout the province.

The society will manage the day-to-day operations of the units.

Since 1987, the society has offered women and their children a safe place to stay at Lilli House.

The non-profit also offers counselling, support and a range of other services, including preventive education programs.

Ney said transition houses like Lilli House are just the first step of a very long and difficult journey for women and their children escaping violence.

“Having longer-term, affordable housing units available for when they are ready to leave the transition house is crucial in helping them to rebuild their lives,” Ney said. “By opening these units in Courtenay, we are providing another level of support to women, children and families in need in the Comox Valley.”

Women will receive assistance accessing and receiving referrals to other services available through the society and in the community.

This can include but is not limited to, counselling for themselves and their children, assistance with job searches or exploring educational opportunities and parenting support.

“For women fleeing violence, access to housing will help them take the important step towards safety for themselves and their children so they can focus on healing and recovery,” said  Melanie McCollum, acting mayor, City of Courtenay.

“This facility will offer them the dignity, support and respect they so deeply deserve. We are very grateful to the Province and the Comox Valley Transition Society for providing this much-needed service for women and children in our community.”