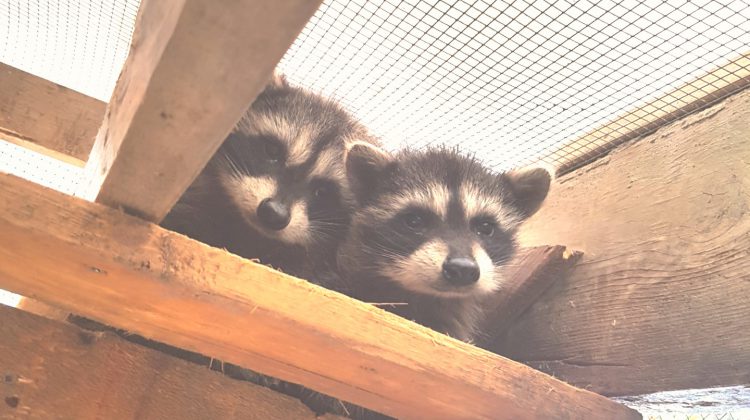 Two of the young raccoons being cared for at the MARS Wildlife Rescue Centre. (supplied by Heather Alley)

The MARS Wildlife Rescue Centre needs your help to feed a slew of orphaned raccoons.

The centre in Merville has 20 of the little critters in its care and is asking for grocery gift cards to purchase various food items.

Anyone who wants to help out can drop off gift cards at the centre.

The raccoons are all babies, ranging from six weeks to four months in age.

This is the second year that MARS has taken in raccoons. Previously they went to Wild ARC in  Metchosin near Victoria.

Manager of wildlife rehabilitation, Gylaine Andersen, said many of them were abandoned by their moms.

“Mom was in somebody’s attack or somebody’s shed or they just wanted to have her leave the area and they didn’t check to make sure there weren’t any babies with her,” Andersen said. “So we did try to reunite quite a few litters and in some cases we were successful and in some cases she didn’t return to come get them.”

“It’s really intensive, especially when they’re infants,” she said. “We were feeding them five times a day, we’re still feeding them four times a day right now but it takes a lot of work, just the feeding and cleaning. They’re very messy little animals, as well.”

The youngest ones are being bottle-fed or tube-fed formula that is ordered from the U.S.

Once they’re old enough to eat solids, the older raccoons are fed a diet of dog and cat kibble, fruit and berries, fish and seafood, and bits of meat because they’re omnivores and will eat just about anything.

“If we don’t expose them to different types of food now, then they won’t really know what to go when they’re out in the wild,” Andersen said.

Grocery store gift cards are appreciated because they allow volunteers to buy the food the raccoons need.

Anderson said a lot of the reasons why the young raccoons are needing help are human-caused. “We have a responsibility as humans to help them out and solve whatever issues that we’ve caused them.”

The raccoons will be re-introduced to the wild in September or October.