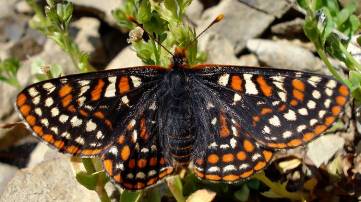 A Taylor's checkerspot. (supplied by the Province of British Columbia)

At least, that’s the hope.

A team of scientists and community members began restoring the park’s coastal bluff meadows in 2015. The province says the goal is to create an ecological community that would be suitable for Taylor’s checkerspot larvae.

The larvae will be released next spring. Restoration teams removed confiers and invasive plants in the area, replacing them with plants that provide food for larvae.

Erica McClaren is a conservation specialist working at the park and she says it’s exciting to help a species recover.

“We’ve been spending five years getting the habitat ready for butterflies to come back and I think it’s time to throw them out there,” McClaren said.

“You don’t want to put them back into an area where they are destined for failure. Hopefully this will give another location where Taylor’s checkerspot can exist, so it buffers their population from possibly being extirpated from B.C.”

Historically, Taylor’s checkerspot butterflies could be found all over southern Vancouver Island but now, they only live in the Courtenay and Denman Island areas.

Habitat loss from urban development, as well as an overabundant deer population,  have contributed to the species’ declining numbers. The species needs open meadows and wet plants in order to thrive.

“I think engaging private landowners, in combination with maintaining the small populations in existing known refuge areas on public park and conservation lands, offers the most hopeful scenario,” Bland said.

Conservation work at Helliwell Provincial Park is supported by the BC Parks License Plate Program.