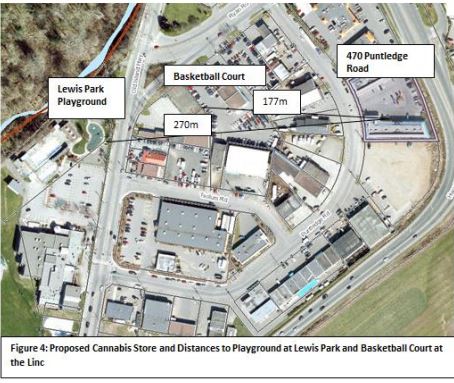 The proposed store was to be located The proposal is located on Puntledge Road, about 176 metres from the Linc Youth Centre. (supplied by the City of Courtenay)

You won’t be finding a recreational cannabis store on Puntledge Road anytime soon.

Courtenay council members voted down a rezoning application that would have allowed Oceanside Cannabis to lease space at #230 – 470 Puntledge Road.

Mayor Bob Wells said the store’s proposed location was the main reason why rezoning was denied.

Council believed it was too close to the Linc and Lewis Centre. It was within the 300-meter buffer from a City owned playground including the spray park and skateboard parks. It was also within the 400-metre buffer from the proposed government store on Ryan Road.

“So that certainly had some discomfort for folks,” Wells said. “And then there was the government cannabis store across the street in the Superstore Mall. I think that was probably less of a concern but certainly something that we wanted to make sure we were making the best decision when we look at how this is going to be affecting our community five, 10 years down the road.”

The city has now denied three of nine rezoning applications for recreational cannabis stores in the community.

An application for a store at 605/625 Cliffe Avenue, while approved by the city, was subsequently withdrawn by the applicant.

That leaves five in various stages.

“We’re confident based on feedback from other communities and stuff that these are not going to have a detrimental effect on our community, but we still want to see the proof in it,” he said.

Council did approve final reading to allow rezong for a private store, The Patchi, at #103 – 2270 Cliffe Ave.