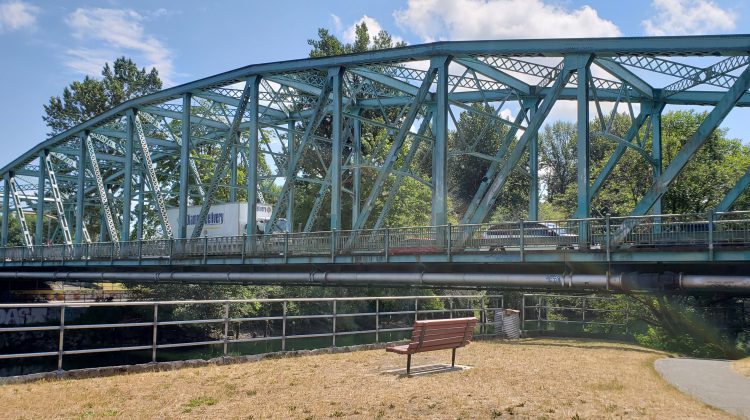 The 5th street bridge will be getting renovations starting in either 2020 or 2021. (Jon Gauthier, MyComoxValleyNow.com)

The co-owner of Michael’s Off Main restaurant is not a fan of the 5th Street Bridge Rehabilitation Project.

Michael Gilbert made it clear to council that he feels they are going in the wrong direction.

The rehabilitation project includes widened pedestrian and cycling paths on each side. They also include:

Courtenay Mayor Bob Wells told the MyComoxValleyNow.com newsroom in late July that the project has been long overdue.

“We’ve been wrestling with this bridge project for some time, I think the first time it came up was around 1999, but it was decided at the time to delay it, and those delays just continued right along.”

But Gilbert, who spoke as a delegation at council’s most recent meeting, believes the city is wasting money on a bridge that is going to have to be eventually replaced anyway.

In particular, Gilbert took aim at cantilevered pathways, which has a price tag of $2 million including tie-ins to existing pathways.

“They still deny that we can have a three-lane bridge for under $30 million,” he said. “They just want to patch up the bridge and then put cantilevers on it for scooters and they think everything is going to be okay. I don’t really agree with that at all.”

Upgrades are expected to cost $8.3 million with $6.3 million funded by the city.

The remaining money would be covered in a grant from the New Build Canada’s Small Communities Fund.

Gilbert believes the city could have addressed the bridge issue much sooner.

“Did it originally cost under a million dollars? Probably 12 years ago it did, but they’ve been sitting on their hands since then and now we have a price tag of over six (million),” he said.

He was also concerned about how bridge traffic will be impacted while the work is being done.

“When they’re ready to close the bridge for a minimum of six months, and I think they’re going to let us have access to one lane, it’s going to be devastating to the valley,” he said.

Public sessions about the project will also be held this fall.

The construction start date for the project has not yet been finalized.

The deadline to complete the project is March 2022.

For more on the Fifth Street Bridge rehabilitation, click here.