‘Sister Island Swim’ from Denman to Hornby a success 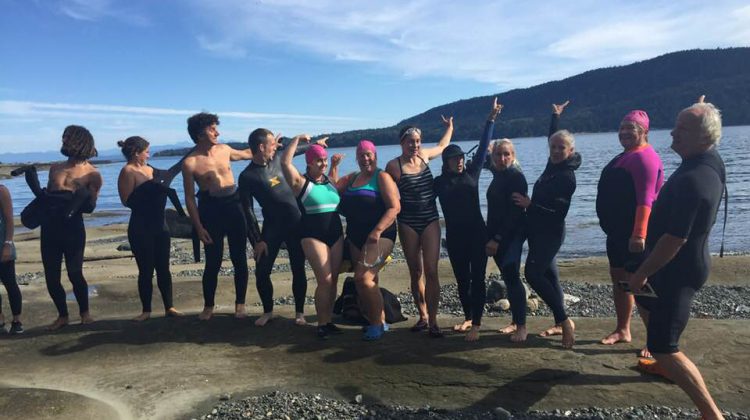 A few hardy swimmers are resting their weary bones today.

This, after they successfully completed the Sister Island Swim from Denman to Hornby Island.

The inter-island swim was supposed to happen on Aug. 30, but was postponed due to strong winds in the Strait of Georgia. Conditions worked yesterday though.  The swim started on the shores of McFarlane Beach and finished at the Harbour by the Thatch Pub.

“It was good,” he said. “(At) the beginning, the water against Denman Island was really, really cold and it did get a little bit warmer towards the middle and the warmest was right against Hornby Island. I guess they have luck with warm water or something.”

Rapati said the final third of the swim was mentally taxing.

“You’re swimming away and you look to make sure you’re swimming in the right direction and it looks really far away,” he said. “Then you swim a whole pile more and it still looks the same distance. And after doing that 20 times and it hasn’t gotten any closer you think, ‘Oh my God, I’m not going anywhere.’ But sooner or later you do make it to the end and it feels pretty good to make it.”

The 15 swimmers, which included 10 women and five men, weren’t alone. They were accompanied by a flotilla of 12 boats that included motorboats, kayaks, and a solar powered electric boat. Rapati said safety was the first priority and there was no pressure on any of the swimmers to make it to the end.

Three swimmers came over from Hornby Island and the rest were from Denman Island. The participants entered the water together but spread out as the swim wore on.

Rapati noted that this isn’t the first time the channel has been swum.

“I know four other people who have swum it in the last 20 years,” he said. “But this is the first organized group swim.”

This could even be shaping up to be an annual event.

“We had a lot of fun doing it, it was a nice camaraderie and everyone enjoyed themselves, so yeah, we’re looking at doing it again next year; probably in the summer when the water is a little bit warmer,” Rapati said.