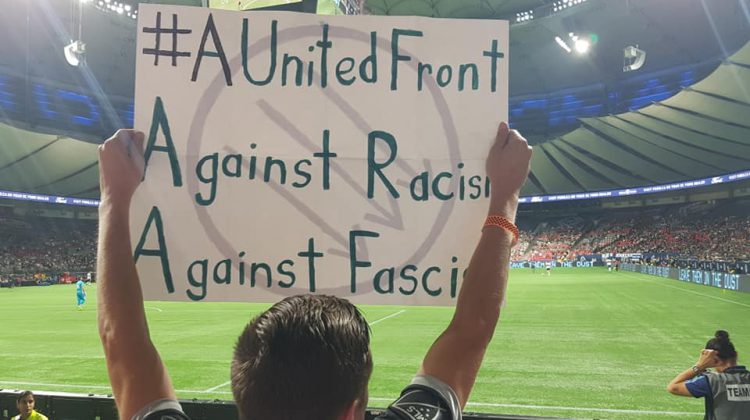 Campbell River resident Joshua Griffith was reportedly banned from the rest of the Whitecaps games, but the team has reversed that ban. (Joshua Griffith, Twitter)

A Campbell River man has been reportedly banned from the rest of the Whitecaps’ games.

But then, the organization reversed the ban.

It all started when Joshua Griffith brought an anti-racist and anti-fascist sign to the team’s August 31st game in Vancouver. His sign said #AUnitedFront Against Racism, Against Fascism”.

According to various reports, no one said anything to him about his signs when security first checked through his bags. Someone reportedly came up to him near the end of the game to tell him his sign wasn’t in line with the league’s policy.

Griffith tweeted he received a call on Thursday from the Whitecaps, saying he was banned from seeing the last three games of the team.

But he received another call as well as an e-mail, telling him he’s not actually banned. The team had just wanted to give him a warning about their sign policy.

The team and the MLS have a “no political” signage policy. Griffith was told he will be banned immediately if he brings another political sign to a game.