Denman Island beaches getting a cleanup 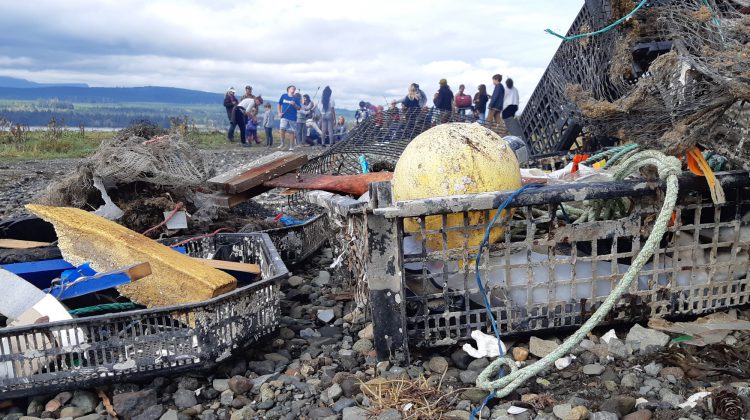 Starting tomorrow and leading up to next Saturday, more than 150 volunteers will be cleaning up the beaches on Denman Island. (Supplied by the Association for Denman Island Marine Stewards)

The annual Denman Island community cleanup is about to get underway.

Starting tomorrow and leading up to next Saturday, more than 150 Denman ‘Islanders’ will be cleaning up the beaches.

On top of that, they’re boating to remote coves and islets to remove marine garbage.

The Association for Denman Island Marine Stewards is organizing the cleanup.

Stewards chair, Dorrie Woodward, noted that volunteers adopt their own stretch of beach to clean up.

“Different people take assignments for different lengths of beach,” she said. “And other people use their boats and go into all sorts of difficult places and bring out piles that have been gathered on the beach.”

She added, “people go out on their own, to go to part of the beach that they’ve decided they want to do.”

The piles are left at different access points around the island, to be picked up later.

Most of the debris is plastic.

In a release, the stewards said that 90 percent of it comes from the shellfish aquaculture industry based in Baynes Sound.

Over six tons were collected last year, an increase over the yearly average of four to five tons.

Next Saturday, the stewards are hosting their 15th annual Beach Cleanup at the Old School Recycling area from 9:30am to 1:00pm.

Woodward said the cleanup is when everybody drops off piles of debris that they’ve gathered.

Woodward said that sorting day is “a whole lot of fun.”

“We have as many as 100 people working together, creating all these different stacks of different kinds of things. We have a big lunch that we give to everybody free,” she said.

BC Ferries CEO Mark Collins is expected to take part in Saturday’s event. He’ll be leading a team of BC Ferries employees to assist local volunteers to sort the debris gathered from Denman Island’s shoreline.

Plastic coating from the cables of the Baynes Sound Connector, a BC Ferries vessel, has been peeling off and drifting onto the beaches of Denman and Hornby Islands.

The stewards have organized recycling for almost all the plastic debris collected off the beaches.

With the help of Ocean Legacy Foundation, which can process and re-purpose the plastics and Fanny Bay Oysters,  which picks up and reuses the unbroken aquaculture gear, very little goes to the landfill.

BC Shellfish Growers Association and Fisheries and Oceans Canada will be organizing a beach cleanup for the west shore of Baynes Sound, and will also be working with Ocean Legacy to recycle the plastic debris they collect.

Meanwhile, for Woodward, the motivation behind the cleanup is simple: “The love of our beaches and they really do get covered in plastic debris, especially on the Baynes Sound side because the shellfish growing industry has a lot of plastic gear and equipment that washes ashore.”

“First of all, it’s self defence so that we can actually walk the beaches. And we know that it ultimately becomes micro-plastics and debris and there’s a lot of netting and that’s just not good. We’ve certainly had herring get under nets, we’ve had seals get under nets, lots of other fish and crabs…, so just getting it out of there seems like the very best approach.”

The stewards will have a table at the Denman Island Market tomorrow. You can register there and sign the participant’s form. You can choose to clean a specific area of shoreline, or join one of our boating, trucking or sorting teams

Anyone wanting to help out in this year’s cleanup can also call coordinator Liz Johnston at 250-335-3266.