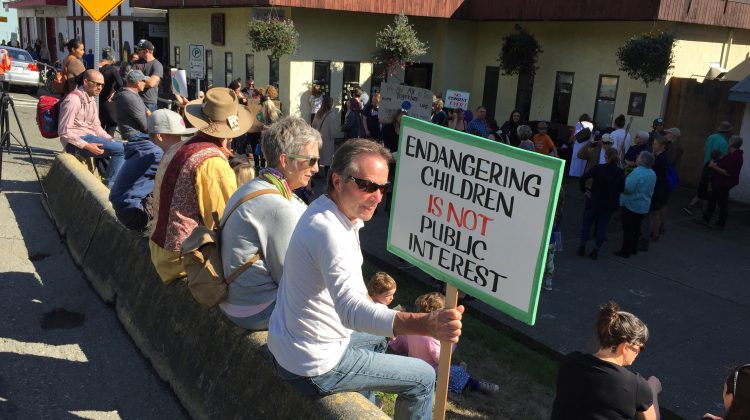 Cumberland residents are taking a stand for climate change awareness.

More than 100 people of all ages gathered outside of the village hall today as part of a global climate strike.

It kicks off a historic week. In more than 150 countries, people are stepping up to support young climate strikers and demand an end to the age of fossil fuels.

Meaghan Cursons helped promote the Cumberland event. She said it makes no sense to drive all the way to Victoria to have their voices heard.

“We need to be doing this kind of stuff right in our neighbourhoods and walking home from our school,” she said.

Cursons noted the scientific evidence of climate change is undeniable.

“We’re coming together in solidarity with hundreds of millions of people around the world who are wanting people to wake up to science and facts and quit with the political BS around this, and recognize that science knows what it’s talking about, and this is a drill and we’re in trouble and young people are leading the way because older people have sucked at it.”

Josie Patterson said that if action isn’t taken now, future generations will be feeling the negative effects of climate change.

“The youth are the ones who are going to be living with the inaction of our previous governments of the older people and the older generations.”

She added that the youth are the ones who are coming out in large numbers led by Swedish environmental activist Greta Thunberg to protest our government’s inaction on climate change and to ask them to actually make tangible steps moving forward into this future.

Patterson said she was incredibly impressed by the village’s dedication to the cause.

“We only officially announced that there would be a Cumberland-based protest about two or three days ago and there is probably at least about 100 people here already who are out showing their support and we’ve just started.”

Cursons noted that some local businesses closed their doors in support.