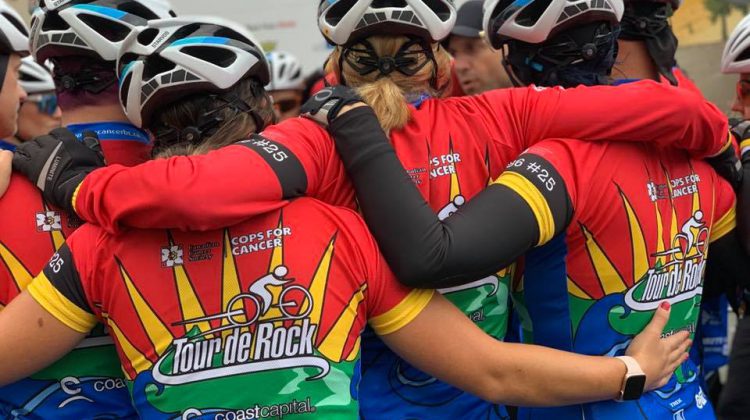 Tour de Rock riders huddled for some inspirational words before the first day of riding on Sunday. (Supplied by Cops for Cancer Tour de Rock, Facebook)

The wheels are turning for the Tour de Rock team as they ride down island to fight childhood cancer.

The Cops for Cancer riders are in Port McNeill, Woss, and Sayward today and will ride into Campbell River tomorrow.

On Wednesday, they’ll continue south to the Comox Valley.

From there, they’ll be in Qualicum/Parksville, Port Alberni, and will wrap up the first week on Saturday night in Tofino and Ucluelet.

“Had a bit of a wet start but the day cleared up and it was absolutely beautiful in Port Hardy and Port McNeill for the riders,” Hennessy Jackson said.

Port Alice residents showed up in numbers along with a $6,400 donation. In Port Hardy, the riders were greeted by sunshine, smiles and a cheque for $13,692.

Hennessy Jackson said that the reception in Port Hardy was “wonderful.”

“It’s always great; they’re super pleased to see us, we saw past riders and people from the detachment.”

The team was joined on Sunday by junior team member, Beckett. The five-year-old is the big brother to Weston, who is currently receiving treatment for cancer.

Meanwhile, as far as on-again, off-again showers, a rainy start to the week isn’t a bad thing, Hennessy Jackson said: “It will help the team bond and be there for each other.”

Hennessy Jackson noted that the team is looking forward to riding through the mid island.

“We get a little busy, a (few) more stops during the day which is awesome, lots of fun for the team and really gives them the energy to keep going doing what they’re doing,” she said.

Hennessy Jackson also noted that the riders draw inspiration from the children and families who are impacted by cancer.

“Everyone has their own reasons for riding but nobody is unaffected by cancer and the people that we meet along the way, getting to hear their stories, that’s what really keeps the riders going, especially on the tough days when they’re wet and cold and tired and doing 150 kilometres, because nothing that they’re going through can even begin to compare to what a child going through a treatment of cancer, has to go through.”

To date, Tour de Rock has raised more than $25 million for pediatric cancer research and support programs, and has spawned three other similar Cops for Cancer rides elsewhere in B.C.

You can see the team’s schedule and download a full itinerary here .