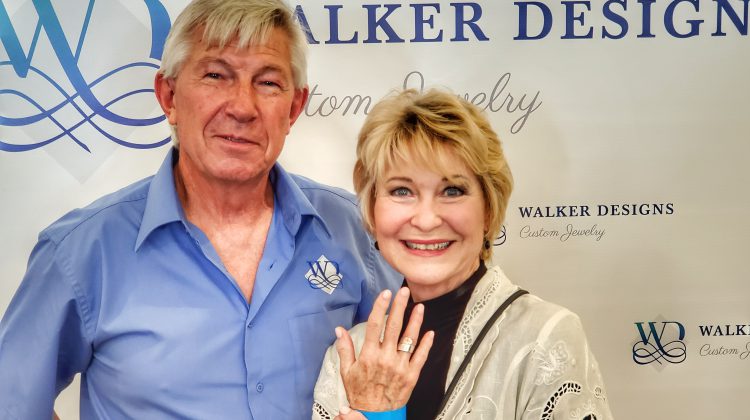 Comox Valley jewelry artist Dan Walker with Danny with Dee Wallace at the Pre-Emmys event. Wallace was starred in the 1982 blockbuster E.T. (Supplied by Dan Walker)

Silversmith, designer, and engraver Dan Walker handed out his hand-made wrap rings to Primetime Emmy Awards nominees at a private function in Hollywood on Saturday.

Walker called the Emmy Gift Suite event was a success.

He notes that 100 celebrities attended and he gifted each with an engraved sterling silver wrap ring with a copper sand dollar overlay.

“I custom fit the ring for each celebrity,” Walker said.

He brought t-shirts and asked the celebrities to autograph them.

Walker plans to donate them to YANA for fundraising purposes.

YANA is an organization that helps Comox Valley families that need to travel to access medical treatment for their children.

He added that the celebrities “were happy to sign the shirts for such a great cause.”

Walker also brought 120 small cards with an inspirational message and a US $5 bill and donated them to a Hollywood organization called Youth Emerging Stronger.

“They support local youth in need and we felt it was important to give to those in need to balance the gifting event,” he said.

Before heading to Hollywood, Walker created each ring by hand. It took him about an hour to make each piece which he cut from a sheet of silver. He then soldered copper sand dollars on each of them.

Polishing them is the next step and when they are ready, Walker hand engraved one of my west coast wave designs on the band.

He noted that the final step was shaping them into a ring.

Looking back on the weekend, Walker said the experience “revealed to us just how many people are involved in the industry and it was fascinating to be able to see where it all happens.”

The 66-year-old Walker only started making jewelry two years ago.

From there, he started his own business, Walker Designs,  and works from his home studio in the valley.