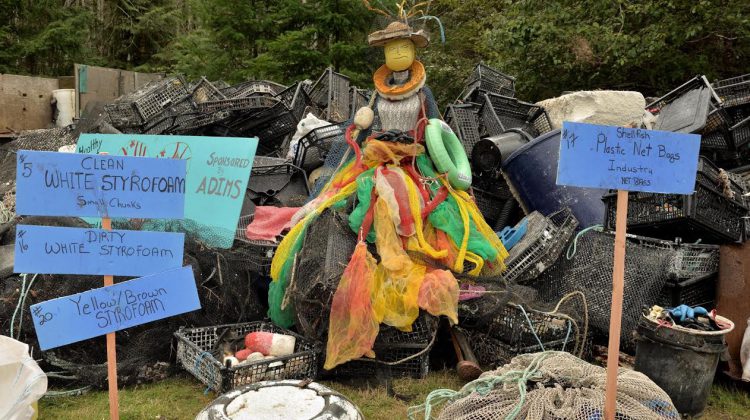 What’s being described as a ‘tsunami’ of debris is off of Denman Island’s beaches.

The Association for Denman Island Marine Stewards organized the cleanup. The group has facilitated this annual beach cleanup for the last 15 years.

The stewards say most of the debris is gear and equipment from the shellfish growing industry, based in Baynes Sound.

Its chair Dorrie Woodward said the vast piles of plastic debris that volunteers collected off our beaches left the group shocked and frustrated.

“We work with the shellfish growers association and we work with DFO and we try to find ways to make this stop happening, and then to have it be much more is shocking and also distressing,” she said.

During the cleanup, that ran Sept. 21 to 28, volunteers not only cleaned up local beaches, but they boated to remote coves and islets to remove marine garbage.

“All this plastic is like an oil spill in slow motion – it’s all the same petrochemicals and toxins breaking down in the ocean,” Woodward said.

An annual beach cleanup, done by volunteers, cannot begin to keep up with the industry’s plastics that litter our beaches and ocean, the stewards say.

Liz Johnston, beach cleanup co-ordinator for ADIMS, said, “It’s long past time for Fisheries and Oceans, the regulator, and the shellfish growing industry itself, to take responsibility for labelling, securing and controlling aquaculture gear and equipment on and off tenures and rafts”

The stewards thanked BC Ferries CEO Mark Collins CEO and his teams for their contributions to the cleanup.

They cleaned beaches, hauled debris in boats and sorted piles of plastic.

The stewards say that BC Ferries has taken “full responsibility for the plastic peeled off the ferry cables, taken action, and made a commitment to stop the pollution at the source.”

“We respect that they have made themselves accountable, and we will be tracking their efforts,” they said.

Woodward also praised the volunteers for their hard work during the week.

“Our community absolutely loves our community and is really involved and people really of all ages… there are photographs of people there who are in their late 80s doing work, and we had the whole school involved, so people who are very small and young and people who are elderly all feel very committed to our beaches and having them be beautiful and healthy and safe,” Woodward said.

In all, 150 community volunteers spent hundreds of hours over the last weeks collecting all this plastic debris, filling boats and trucks, sorting and recycling.

The stewards say that “now’s the time for Fisheries and Oceans and the shellfish growing industry to come to grips with the tons of plastic gear and equipment washing ashore in Baynes Sound.”

“These polluters must take responsibility and prevent the plastics from leaving their tenures and rafts. Time to prove their industry is as sustainable as they claim,” they added.