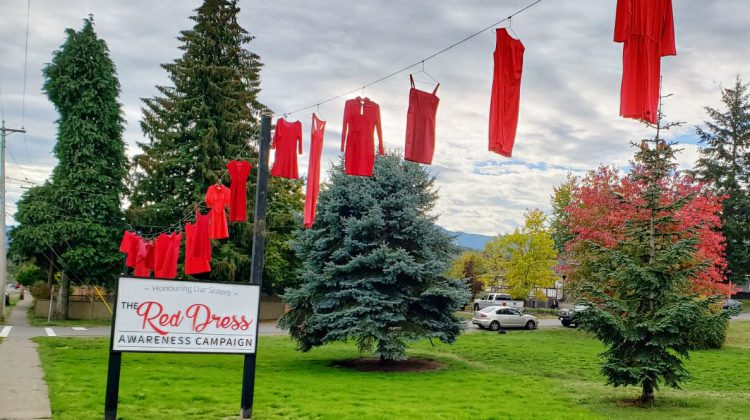 Hang a red dress in your window to recognize Canada’s missing and murdered Indigenous women.

It’s what this week’s Red Dress Awareness Campaign is all about.

This year, the Red Dress Installation is hosted by the Town of Comox.

A 150-foot clothesline with red dresses was installed yesterday on Comox Avenue. It will be the fourth and final installment in the Comox Valley.

And while the annual campaign is based out of Comox this year, the vision is to have communities across Canada plan events around the first week of October.

If you would like to show your support, it’s as simple as hanging a red dress in your front yard, place of business or storefront.

Lee Everson is the volunteer administrator with the Kumugwe Cultural Society and is helping to promote the campaign.

The campaign’s origins date back to 2015 when Walking With Our Sisters – K’omoks opened its door to the community to experience a travelling memorial art installation honouring missing and murdered Indigenous women and girls.

Through the combined efforts of The IHOS Gallery, The Transition Society, and the Kumugwe Cultural Society, and with support from municipalities, organizations and businesses, over 5,000 guests visited the installation on the traditional unceded territory of the K’omoks First Nation.

“It was a profoundly powerful event and when it finished, we got together and we wanted to continue the momentum of remembering these women and girls that have gone missing and also to raise awareness to continue that path,” Everson said.

In 2016 the same organizers came together and created The Red Dress Awareness Campaign & Installation which seeks to recognize and inform the public about the increasingly high numbers of missing and murdered Indigenous women and girls, both in Canada and the U.S.

In 2017, the installation was in Courtenay, last year it was in Cumberland, and this year it’s in Comox.

“This is the final year but we will continue to promote whatever projects that are going on in the community around that first week to continue raising awareness of the missing and murdered Indigenous women and girls of Canada,” Everson said.

“This is not just an Indigenous concern, this is something that affects everybody in Canada and we want everybody to be aware so they can make sure that nothing like this continues to happen and it’s really simple, all you have to do is grab a red dress, a red skirt, whatever, and hang it in your front door, hang it in your business… it doesn’t matter,” Everson said.

She also urges people to learn more about the campaign and start the conversation.

“It’s about sitting down at the table and talking with your family, your friends, your grandparents, around the water station and have those conservations on what that means and maybe learn a little bit about your local Indigenous community, as well.”

In support of the campaign,  volunteers have started the Lil’ Red Dress Project, in which they create beaded red dress pins and earrings for purchase.

As well, the Comox Valley Transition Society is still accepting donations of Red Dresses. They can be dropped off at 625 England Ave. or at the Too Good To Be Threw location.