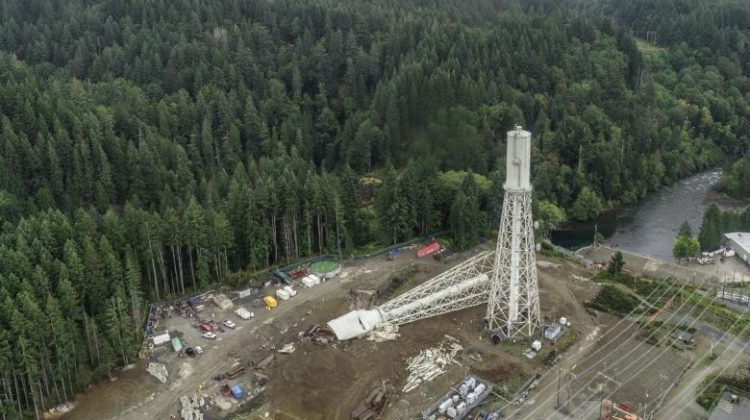 View of the site, including one of the fallen surge towers. (Supplied by BC Hydro)

The decommissioning of the John Hart Generating Station is in its final stages.

Built in 1947, the station needed to be replaced.

The existing facility and pipelines were unlikely to withstand even a moderate earthquake.

He added that the new facility is designed to be seismically strong, reliable, and protects downstream fish habitat from unplanned river flow reductions from the powerhouse.

“Being underground, it is in rock (that is) seismically strong, we have a new powerhouse, and we have a water bypass facility within the powerhouse to maintain fish flows.”

Milestones since June 30 include:

A new trail has been designed and construction is underway to reconnect Canyon View Trail loop; and there have been new public river put-in improvements – with a rock pad design and installation for kayaks, canoes and river rafts only.

The next steps from October to November include:

A total of 95 percent of the lower Campbell River comes out of the John Hart Generating Station. A new water bypass will ensure that if we need to shut down the facility for any reason, water flow can be maintained for fish and fish habitat.

“The past nine months have been working away to remove that old above-ground hydroelectric facility, and the planting has started to allow the penstock corridor and other laydown areas to essentially become forest again, so we’re at the very end of this overall project that basically started with site preparation way back in 2013.”

Just over $1 billion was budgeted for the project and Watson said it is “on budget.”

Watson noted that as many as 500 people worked on the project in 2017, with over more than 100 service contractors and suppliers.