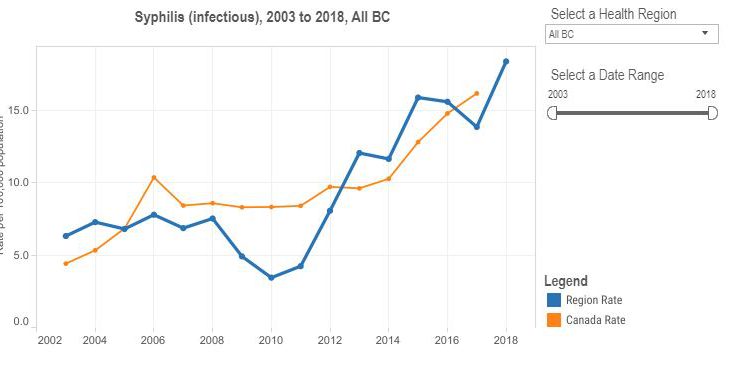 Chart shows the number of infection syphilis cases in B.C. from 2003 to 2018. (Supplied by the BC Centre for Disease Control)

The number of infectious syphilis cases in B.C. is at a 30-year high.

Sixteen of those cases were on the North Island, with 42 on the Central Island, 76 on the South Island, and 36 in the Coast Garibaldi Area, including Powell River.

“We’ve been working to address syphilis in B.C. and raise awareness about testing among men who have sex with men,” Henry noted. “We are currently working with our partners to see what more we can do to reduce the number of infections but we also need the public to be aware of the risk and to be proactive about testing and treatment.”

While syphilis continues to disproportionately affect gay and bisexual men in B.C., infections jumped 40 percent among women between the ages of 15 and 49 from 2017 to 2018.

The BC Centre for Disease Control (BCCDC) is reminding you to speak with your health care professional about testing for sexually transmitted infections, especially if you have new sexual partners, or if you are pregnant.

Syphilis can also be transmitted from a pregnant woman to their unborn child in pregnancy or during childbirth.