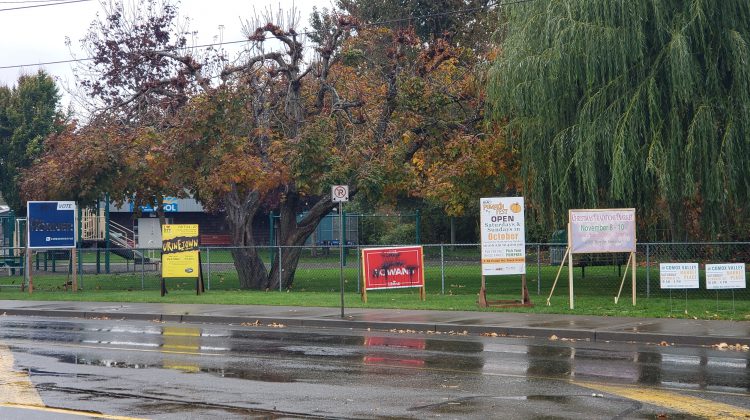 The two campaign signs along 5th Street have been vandalized with spray paint.

This is the second time campaign signs in the Comox Valley have been vandalized.

The MyComoxValleyNow.com newsroom reached out to the candidates to get their take on the vandalism.

Liberal candidate Jonah Gowans says it’s sad to see the signs damaged, but it’s something that seems to be a trend this year.

“I’ve seen signs from each party damaged. It’s sad, but it’s just a sign of the times right now that this is a part of politics right now,” said Gowans.

The Courtenay-Alberni NDP Campaign Manager Vanessa Scott says it does look like a trend this year, but the party does what it can to minimize the damage done to election signs.

“It’s really sad to see this year too seems to be a spike in vandalism for all campaigns across the riding. We’ve been reporting these incidents to the police but in general not favouring media coverage for fear that it could inspire copycat attacks.”

“We want to make sure those (signs) are respected and we feel it’s something very important. It’s really disappointing when we see that kind of vandalism because it’s not the kind of respectful dialogue we want to see on Canadian political campaigns,” said Winter.

Conservative Byron Horner did not respond to a request for comment.