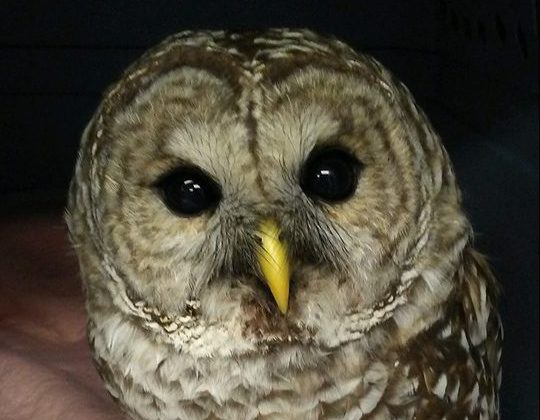 A young owl is lucky to be alive.

It was found lying still on the side of Highway 19A in Royston on Oct. 14.

While on a late-night walk with her son, Jasper, Emily Charette spotted the owl.

They wrapped it in a blanket and took it in overnight before taking it to the MARS Wildlife Rescue Centre in Merville the next day.

Charette said the male bird had a broken wing and was bleeding from the mouth.

MARS assistant manager of wildlife rehabilitation, Kiersten Shyian, said the owl looked dead but then flipped itself over.

“(He) does have some fractures in his wings and he is a little bit dehydrated so we are providing him with fluids and any medication to stop any swelling as well as pain medication. But he is doing really (well), we’re hand-feeding him mice.”

She said this owl has lots of company at the centre.

“We get a lot of birds that get hit by cars which I’m assuming is what happened to this one,” Shyian said. “We have, I think four other barred owls in captivity right now and most of them were hit by cars. We do get a lot of patients with the same injury.”

Shyian noted that this is a reminder to not throw food out of vehicle windows.

“They do land on the side of the road and then different prey species will go and eat that and it causes a hazard for the predators, ” she said.

The owl’s prognosis is very good.

“He does have a fractured wing but typically fractures in birds heal a lot faster than (they do for) you or me. I would say definitely a few weeks minimum (in captivity) but definitely depending on the fracture it could be a lot longer,” Shyian said.

“We can’t say for sure, but we are very hopeful that he will make it through.”