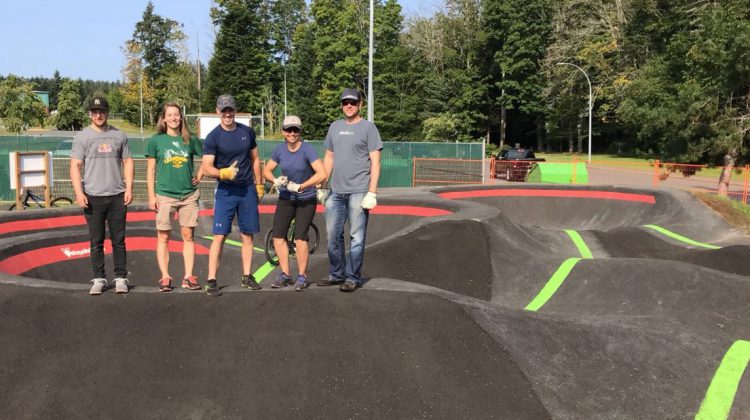 The CR Bike Society pump track next to the Sportsplex in Willow Point. (Supplied by the CR Bike Park Society)

The final phase of the Campbell River bike park is about to take shape.

This week, Campbell River Rotary approved $100,000 in funding to complete the construction.

The CR Bike Park Society says that within the next few weeks, they’ll start clearing the rest of the site so that the final designs can be completed.

Once the designs are approved by the city, the society says it expects construction to start early next year with completion by late spring 2020.

Volunteers and in-kind will still be needed.

The society’s Wendy Ravai said this is exciting news.

She added that the pump track which has been in place for the past couple of months been well received from the biking community.

“The kids, the adults, so much positive feedback, so many people getting outside, enjoying this facility… we’re so excited about it.”

Ravai said this funding injection will take the park to new heights.

“Now, we’re going to put in some jump lines. So, anyone who’s ever wanted to try jumps or wants to practice jumps, this is going to be the place.”

Coast Gravity Park Group will be designing and installing the new addition.

“These guys have created a successful mountain bike gravity park in Sechelt,” Ravai said. “They have been at it for six years and have proven to be very successful and we’re super excited to have these guys over to do this.”

She called it a “multi-generational” facility.

“We’re so excited to have something like that for Campbell River where two-year-olds on little run bikes can use the same facility as older people who are getting back on bikes or just want to build their skill up,” Ravai said.

“So the family component to this park is so important.”

Ravai said it fills her heart up to be involved in “such an amazing community project that was built by the community.”

“We have had so many people donate that live here, that work here, that have businesses here, and there’s no way we could have done it without them.”

Funding for the first two phases of the bike park came from a City of Campbell River of $85,000, and $95,000 in cash and in-kind donations from local companies and individuals.