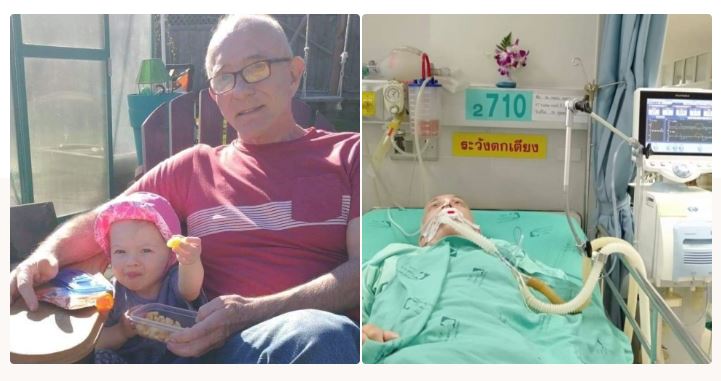 On September 12, Vancouver Island man Daniel Treacher was seriously hurt after falling off the roof of a Thailand home. (Supplied by Lisa Robson, GoFundMe)

The family of a Vancouver Island man who was seriously hurt in Thailand wants to bring him home.

A GoFundMe page has been launched to bring the 66-year-old back to Canada.

The GoFundMe’s organizer, Lisa Robson, is one of Treacher’s daughters.

“He underwent immediate brain surgery and is still in the hospital in Thailand,” Robson said on the page.

“Unfortunately, he does not have medical insurance in Thailand and the expenses have become an overwhelming burden for his family. Dan is not well enough to be transported by a plane back to Canada and is in need of full-time hospital care.”

She added that “Nursing care, medications, scans and all other medical expenses are costing more than you can imagine. Family and friends are asking for your help to get him back to good health and fly him back to Canada. If you can spare anything to help save this man’s life, it would be forever appreciated.”

His daughter Cherrill Treacher said that although her dad should have had proper insurance he had tried to get his orders in order.

“His heart condition made insurance expensive so instead he had brought what he that was enough money to Thailand to cover medical expenses,” she added.

“He had drawn up a will and a letter of representatives to act on his behalf if he were hurt. I wish I had known beforehand that he hadn’t chosen an insurance policy but it doesn’t mean that our family isn’t deserving of help. People make mistakes and we love him anyway.”

His former stepdaughter Carrie Hall went to Facebook to ask for help.

“I know our town has huge hearts,” she said.

“He used to be a resident here in Campbell River for those 22 years that he was my stepdad.”

Hall said the conditions in the hospital are less than ideal.

“There’s no one to help him if he needs a feeding tube or any of that kind of stuff and because of his pneumonia, he was having quite a bit of difficulty breathing and fluid in his lungs and stuff, and that’s all being done by a nurse that’s been hired.”

She hopes he can return to Canada soon.

“It’s just terrifying to think of him there, and suffering the way he is,” Hall said. “And I just want him to have Canadian medical (care). That’s the only option at this point.”