MARS says owl’s life not worth the “human entertainment” 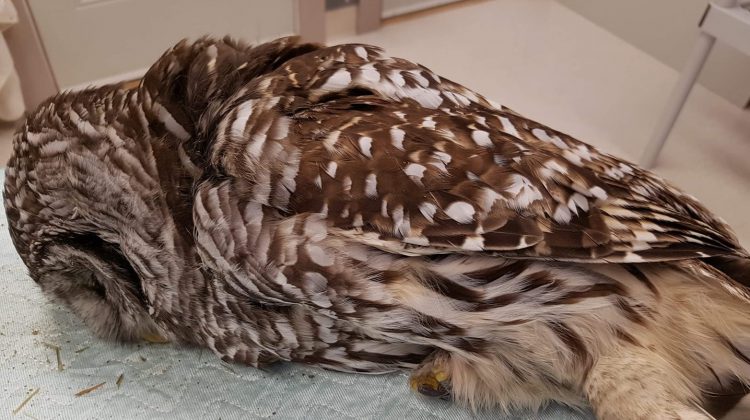 The deceased barred owl that was spooked by fireworks on Halloween. (Photo provided by the MARS Wildlife Rescue Society)

The Mountainaire Avian Rescue Society (MARS) says the price was “too high for human entertainment” after fireworks spooked and killed a barred owl.

The center posted to its Facebook page yesterday saying an “owl was spooked by fireworks on Halloween and flew headfirst into a shed.”

Manager of Wildlife Rehabilitation for MARS, Gylaine Andersen says the homeowner found the owl on her property after the fireworks were set off.

“This owl was found by the homeowner near her shed. It was actually deceased already when she found it, but fairly freshly deceased. She noticed on the night of the fireworks that this bird took flight and many other birds took flight when the fireworks were going off.”

She says rehabilitators see a large number of animals come into the center after firework events because people don’t realize how much it can affect them.

“A lot of people don’t realize not only does it affect our pets, and a lot of pet owners can speak to that but it also affects the wildlife that are roosting in the trees and you might not even know they are there.”

“They’re very scared and it causes them to take flight without a good sense of a direction and they can hit objects or just become lost. We have known for a long time this is the result of fireworks, but we just want to get the word out to other people,” Andersen added.

She says there are things we can do to keep the fun but also keep wildlife in the area safe.

“You can buy fireworks that aren’t as loud or quiet fireworks have been used in a lot of other cities so we would like to see something like that. If people can’t stop doing fireworks altogether, at least change the fireworks so they don’t have as much of an impact on wildlife.”

Andersen added that even municipalities could do their part to help keep the animals safe during fireworks by introducing “better bylaws restricting the use of fireworks, or even restricting them to certain areas or certain times.”