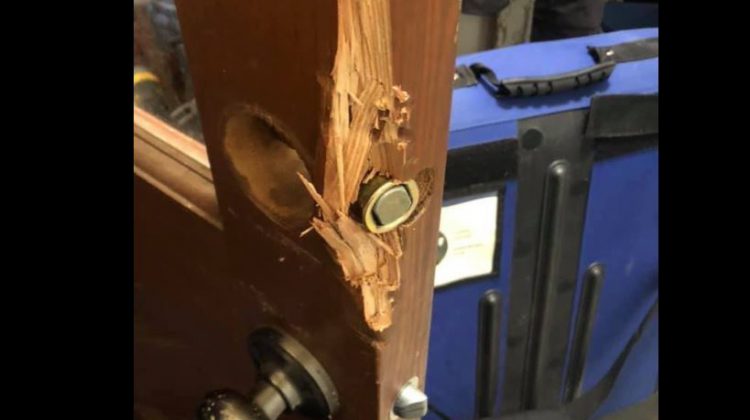 A door was badly damaged in a daylight break-in that happened yesterday morning in Courtenay. (Supplied by Tara Zaal)

A Courtenay family is shaken from a daylight break-and-enter.

Their home in the Huband area was broken into sometime between 11:00am and 1:00pm yesterday.

Someone pried a door open before rummaging through the house.

Tara Zaal said several items were stolen including a gold necklace with a heart pendant.

It’s a precious heirloom that was passed onto her 11-year-old daughter from her great-grandma, who passed away only a year ago.

Nikon camera gear along with her children’s passports and birth certificates, and even their baby teeth were also taken.

Zaal said she was only away from the house for a couple of hours and when she came home, she found drawers and cabinets open around the house.

The further Zaal walked through her house, the more unsettled she became.

“I scanned and I realized my camera bags were all gone and as I walked further and the other side door was busted open,” Zaal said. “The frame was all broken and they obviously forced their way in.”

Her tenant came home and the two of them stayed outside the home until police arrived.

Later, they walked around the neighbourhood to see if anyone had seen or heard anything.

“Nobody had noticed anything because it’s quite private around here so I think maybe that makes us a bit of a target,” she said.

Zaal said after she called her husband and he told her to get out of the house, the gravity of the situation began to sink in.

“It started to really dawn on me that somebody has been here and what if they’re still here. I didn’t go upstairs. I got out and I was panicked. I felt, just, shaky and trying to even just dial the police. Not knowing what to do, it was just panic.”

She joined the police upstairs and had to wear gloves as they looked to see what was taken.

The break-in has put both of the family’s young children on edge.

“I had to wash all of (my daughter’s) bedding and everything and try to make her feel safe, and our son, he’s only seven so he’s afraid of any noises around thinking that there’s someone in the house and we keep telling him that ‘no, no, no, it’s just us.’” Zaal said.

“Trying to reassure them has been really hard because they’re kids and they’re scared. Thinking of someone going through our house and doing things while we’re not here is a really hard thing to imagine.”

Zaal said the family plans to take security measures to make sure something like this doesn’t happen again.

We have reached out to the Comox Valley RCMP for details.