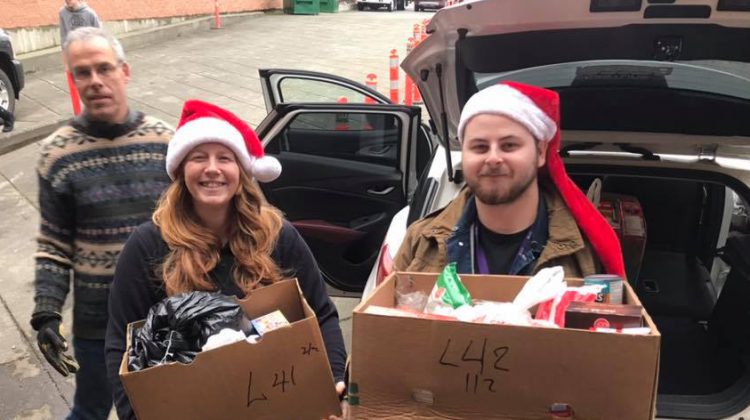 For 46 years, The Knights Of Columbus have been helping struggling individuals and families through their hamper fund.

This year they’re asking for cash and non-perishable food donations, along with gifts for children and seniors.

“I assume that we’re going to get exactly that number this year,” Gearey said.

The food has already been ordered and includes 860 hams and 300 turkeys.

He said they may “see a little bit of a bump” in applications this year, due to Western Forest Products workers who have been on the picket lines for more than four-and-a-half months.

“From what we hear, some of them might put in for a hamper, but other than that I would say it will probably be the same old, same old,” Gearey said.

The hamper recipients cover a wide spectrum, he explained: “Some of the people have jobs but they’re what you call the working poor and they just need that help at Christmas, especially if there are kids, because kids 12 and under get new toys, and seniors 65 and older get a gift, as well.”

Gearey said many who volunteer or donate, were once hamper recipients, themselves.

“A large number of them say, ‘I received a hamper at one point, and I know how much it meant to me, and therefore I’m just trying to give back. It’s not paying it forward, it’s giving back.”

He added that each year, there is an “incredible response” from the community.

“You know, small town, big heart, and we never are without an ample number of people to assemble the hampers. All those hampers are assembled essentially in one day and delivered that day.”

Gearey said the volunteers who deliver the hampers will often bring their children with them.

“They bring their kids out, a lot of instances to show the kids, especially if they’re delivering, that the life that you have is not the life that a lot of other people have.”

He said Christmas is a particularly tough time for those who are struggling.

“To go without is really bad but to go without a Christmas is particularly cruel because that’s a family time and it should be a time of happiness.”

The hamper office is the former True Blue Pet Supplies store at Tyee Plaza. Donations of money, new toys, and non-perishable food may be brought to this location.

Starting this Wednesday until Saturday, Nov. 30, the office will be open from 10:00am until 2:00pm Monday to Saturday.