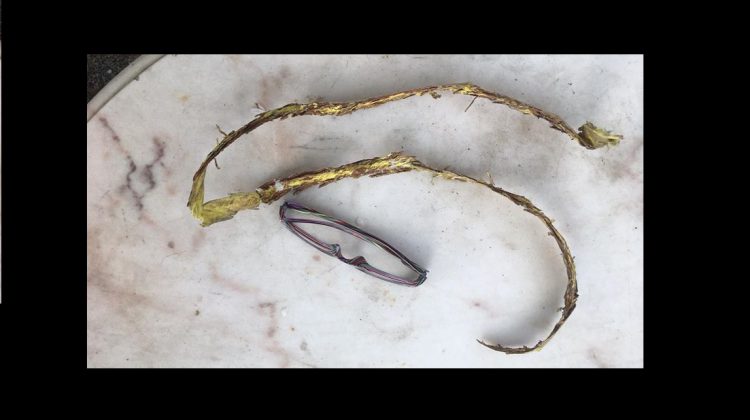 People on Denman Island are worried that a new BC Ferries cable will shed more plastic into Baynes Sound.

BC Ferries is about to install the plastic-coated cable during replacement work.

This doesn’t sit well with Vali Majd, who believes that BC Ferries had plenty of time to find a more environmentally friendly solution.

“I think it’s the lack of foresight and consideration,” Majd said. “Knowing well that they’d had to change the cable, that it was going to come up, knowing well that the other ones are shredding plastic and that they are just saying, ‘we’ve got one more roll, we’re going to use it.’ And even from a corporate perspective, that’s completely unacceptable.”

The new cable ferry running between Denman Island and Vancouver Island was dragged across Baynes Sound for the first time in 2016.

In the years that have followed its maiden voyage, Majd said that Denman Islanders started noticing “significant amounts of mysterious blue and yellow plastic washing up on its shores, later to be identified as the plastic coating off the cable that moves the ferry.”

“It’s simple, they have had plenty of time to order another cable. The pollution shedding off the old cable is not news,” Majd said.

In August, BC Ferries employees, including president and CEO Mark Collins, cleaned up plastic debris from the beaches of Denman Island.

“And now they are back at it dumping again. Unbelievable.” Majd said. “Will Mr. Collins and his crew be back in six months to pick up more plastic, or can we consider that was just a photo opportunity?”

According to the Report All Poachers and Polluters (RAPP) hotline, the public is encouraged to report illegal waste disposal and damage to fish and wildlife habitat as it contravenes provincial, federal, and international laws.

“If anyone else stood on the deck of the ferry in broad daylight and dumped the same amount of plastic into the ocean in the middle of a sailing, they would get likely get tackled, shamed, and prosecuted. But when BC Ferries does it, it’s somehow okay?” said Taina Uitto, anti-plastic activist and member of Plastic Free Denman Island.

Majd said that Baynes Sound is already battling “alarmingly high levels” of microplastic pollution, to the point of equal amounts of silt and organic matter to microplastic, “not to mention the staggering amount of plastic waste from the local aquaculture industry.”

“Since BC Ferries is not stepping up their corporate responsibilities, we the residents must speak for our home and for this sensitive ecosystem and biologically significant area,” Uitto added.

BC Ferries manager of corporate communications, Astrid Braunschidt, said in keeping with its normal maintenance schedule, “one of the three plasticized cables will be replaced with another plasticized cable… at the end of this month.”

Braunschidt said this will “likely” be the last cable with plastic coating to be installed on the Baynes Sound Connector.

She said that BC Ferries reviewed its options and consulted with the community “and with their support we are developing a plan to replace all the plastic-coated cables with flattened strand cables.”

Braunschidt said flattened strand cables are made of steel and don’t have a plastic coating.

“We understand (that) the residents would like to see us work as quickly as possible to rectify the situation and we’re working as fast as we can do that but we have to follow our normal maintenance schedule and that does include replacing a cable this month,” she said.

“It happens that we have a plasticized cable ready to go so we can install that right away. It’s going to take a bit of time to source and to order the flattened strand cable and we’re expecting to install those next year.”

Braunschidt said BC Ferries is going to keep an eye on the one that’s being put in this month as well as the other two that are on the ferry, “and if we do need to do another beach cleanup, we can certainly do that.”