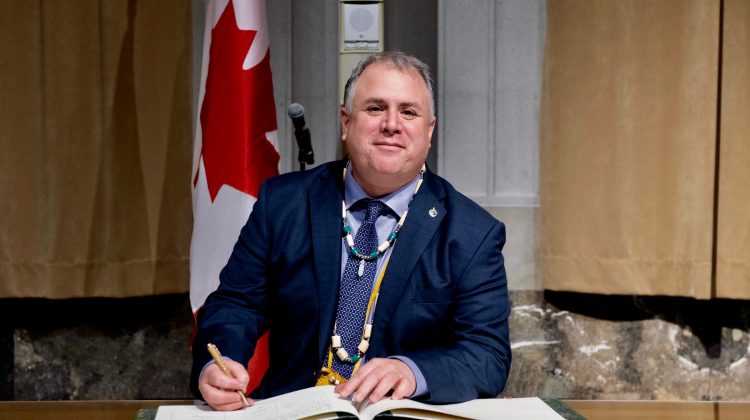 MP Johns being sworn is as Member of Parliament, November 5, 2019. Ottawa, ONTARIO, on 2019-11-19. (Supplied by Mathieu Girard, House of Commons Photo Services)

He was also designated as the critic for small business, tourism and economic development, as well as deputy-critic for Indigenous-Crown relations and Indigenous services.

Singh is the critic for the Indigenous portfolios.

“I am truly honoured that our leader has expressed confidence in my ability to take on these important files,” Johns said.

“The importance of these roles to our west coast economy and the well-being of our people cannot be understated.”

Johns served as NDP critic for small business, tourism, veterans affairs and fisheries and oceans in the last Parliament.

He said his first priority as fisheries critic “will be to work with all parties to ensure immediate and urgent federal actions to mitigate the Pacific wild salmon emergency on our coast.”

“I have asked for an urgent meeting with Bernadette Jordan, Minister of Fisheries and Oceans and will urge her to travel to Vancouver Island in the near future to hear directly from our coastal communities on this crisis,” he added.

Johns said the collapse of Pacific salmon is happening right before our eyes.

“We need the government to declare a Pacific wild salmon emergency in British Columbia,” he said.

“The government hasn’t acted with the necessary steps to show and demonstrate to British Columbians that they see what’s actually happening, and that is the demise of salmon and it’s going the way of the Atlantic cod.”

He added that people on the coast are hugely concerned about the state of wild salmon.

“We’ve seen a huge decline in many and most stocks on the west coast and near extinction of many wild salmon populations on the coast and we need the government to get to the west coast with the new minister and resource those communities because we want to be part of the solution.”

He added that “for decades, we’ve seen Conservative and Liberal governments continue to fail to protect our wild salmon and right now we’re in a crisis. We need the government to act and take necessary steps that they we would in any crisis – like they did with wildfires, like they did with flooding on the east coast.”

Johns said wild salmon is our food security, our culture, and a huge part of our economy, “and it’s critical to Coastal British Columbians.”

Johns said that he has been an outspoken advocate for First Nations and has risen in the House of Commons on dozens of occasions to press the government to end its decade-long fight with five Nuu-chah-nulth nations over fishing rights already affirmed by the Supreme Court.

“Whether fighting First Nations in court over fishing, over children’s dental care benefits or other issues, this government continues to betray its promise that its relationship with Indigenous people is its most important,” Johns said.

“The government’s appeal of the Human Rights Tribunal ruling to compensate Indigenous children and families who were underfunded by its child welfare system is unconscionable, and this will be a major focus of our Caucus in this Parliament.”

Johns said that he also advocates for small business owners and the Canadian tourism industry.

“Small businesses are the largest employer on Vancouver Island and their well-being is tied directly to the availability of affordable non-market housing and pharmacare for their workers,” he said.

“The tourism industry alone provides over 9,000 jobs in my riding and is inextricably linked to a pristine environment, wild salmon and affordable housing for its workers.”