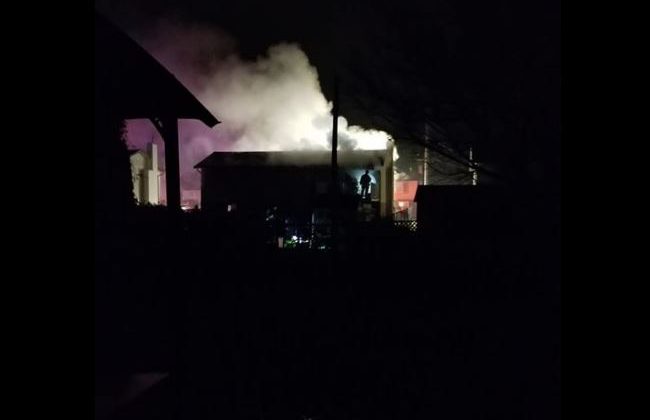 An overnight house fire in central Courtenay is being deemed suspicious.

The Comox Valley RCMP has taken over the investigation of the fire at the 2000 block of Stuart Avenue.

The Major Crime Unit is gathering evidence in the area, but hasn’t been able to determine that this fire was not the result of a random act.

Courtenay deputy fire chief Kurt MacDonald said that while an early call to 9-1-1 saved the house from totally going up in flames, it has substantial damage inside.

The blaze was contained to the ground floor of the two-storey home.

“The fire was contained to pretty much one area of the lower portion of the house, but there is extensive smoke and heat damage throughout,” MacDonald said.

“So in all honesty, it’s not going to be a total knockdown I would think, however, there will be some time before anybody can go back into it because they have to clean up the drywall and everything else like that.”

The Courtenay Fire Department got the call just before 1:30am.

The lone occupant was outside when firefighters arrived and there were no injuries.

Anyone with information on the fire is asked to contact the Comox Valley RCMP at 250-338-1321.

If you want to stay anonymous, you can call Crime Stoppers at 1-800-222-8477 (TIPS) or online at comoxvalleycrimestoppers.bc.ca.