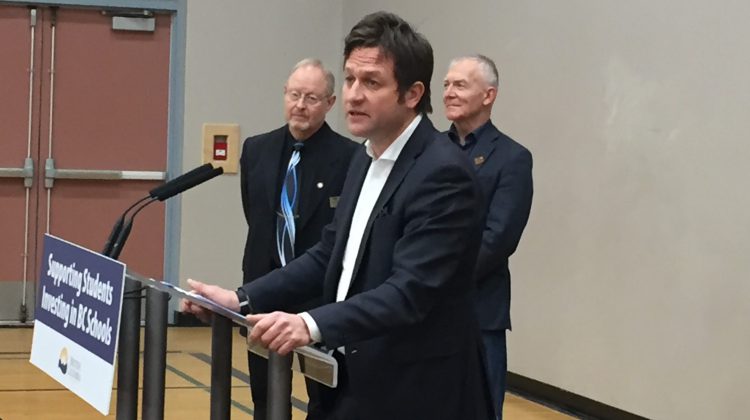 Education minister, Rob Fleming, was in the Comox Valley to announce the construction of a new school on Hornby Island. (Troy Landreville, MyComoxValleyNow.com staff)

Hornby Island is getting a new school.

The province is spending $10.4 million on a new, 95-seat Hornby Island Community school, replacing the previous building that was lost in a fire in August 2018.

B.C. education minister, Rob Fleming, was in the Comox Valley to make the announcement today.

The school will accommodate 100-plus students. It will also include an over-sized gym that will be used as a community gathering space.

Fleming says the new building “will meet the demographics for decades to come on that island.”

Construction is expected to start next fall, with doors opening in 2022.

Students and staff have been in a temporary building since February, with  modular structures barged over last January.

Fleming said the school has had a school for 40 years and deserves a new one for its future.

“The school was, and remains at the heart of Hornby Island. It’s not just a place to learn, it’s a place for the community to gather, to play together, and to show their community spirit and look out for one another.”

Leading up to the final design, Fleming said the province had “really good” consultation with those living on the island.

“I compliment the (Comox Valley) school district for working with the ministry on getting and gathering the views of the community,” he said.

“There was a high value on having community-purpose space there, before and after school programs for kids and using the school, really, seven days a week and into the evenings. That’s the plan, and we incorporated a lot of the feedback and ideas we got into having what I think will be an award-winning design for a small school of its size.”

Fleming said building a new school for Hornby Island is a priority.

“We very rarely see schools lost to fires… and what we have in British Columbia is a self-insured program,” he said. “We have 1,800 schools and rather than pay fire insurance premiums we have a ministry commitment to help communities when they face these kinds of circumstances.”

He said the province found the money within its capital budget and were able to announce a project “that’s right for Hornby Island.”

“It’s a remote education setting, it’s the lifeblood of that community, and it’s the most important institution to an island like that and I think the community has really worked well to make it happen.”

The Comox Valley School District has a really great relationship with lots of different contractors, Fleming said: “I’m sure they will get competitive bids at tendering stage. There are probably some premiums for barging materials and those sorts of things but they have a lot of skilled workers who live on those islands. Typically there is a lot of local hiring and school districts have been very good at managing costs on things like that.”

“People in our community showed how resilient they can be when the former Hornby Island Community school burned down,” said Scott Fraser, MLA for Mid Island-Pacific Rim. “Our government took immediate action to provide short-term classrooms for Hornby students after the fire, and the new school will give them the long-term learning environment they deserve.”

Fraser said while it was a sad day when Hornby Island lost its school to a fire, “it was a great example of just how strong a community Hornby Island is.”