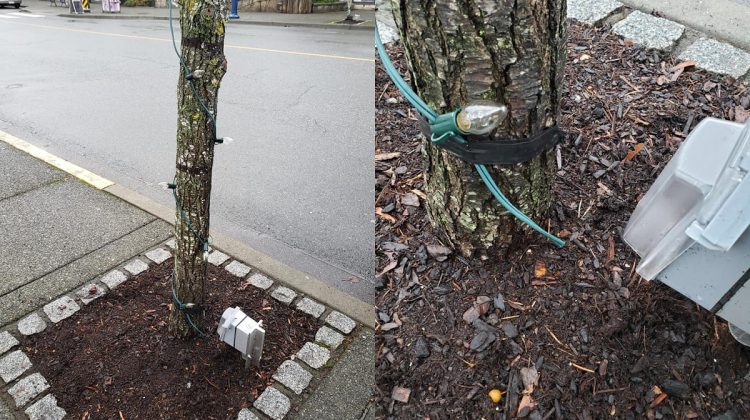 Someone cut the lighting cords on all of downtown Comox's decorative tree lights between Stewart and Port Augusta, including the Town Circle Christmas Tree. (Comox Mayor Russ Arnott, Facebook)

Christmas in Comox is less bright than it used to be, thanks to some heartless grinches.

Wires for Christmas decorations along Comox Avenue have been cut.

The town’s parks superintendent, Al Fraser, said the lighting cords on all of the town’s decorative tree lights between Stewart and Port Augusta, including the Town Circle Christmas Tree have been physically cut by vandals.

“So I believe public works has been already trying to get some of them fixed,” Arnott said.

Arnott said downtown Comox always looks beautiful at Christmas time and for this to happen, “is every sad to see.”

He believes someone may have used wire cutters.

“This doesn’t look like it was ripped with a knife or anything, so we’re asking merchants in the area to review some of their video and if they see something, they’ll let the RCMP know.”

The town says the repair will be extremely time consuming to correct.

“As our staff resources are limited at this time of year we will first concentrate on fixing the Town Circle and then work back toward Stewart as time allows,” Fraser said, in a post from Mayor Russ Arnott.

“We are fortunate to have such dedicated staff and I know they’ll do their best to get this repaired. In the meantime the Town appreciates your patience as we work on this.”

Anyone with information on who is responsible is asked to call the Comox Valley RCMP.