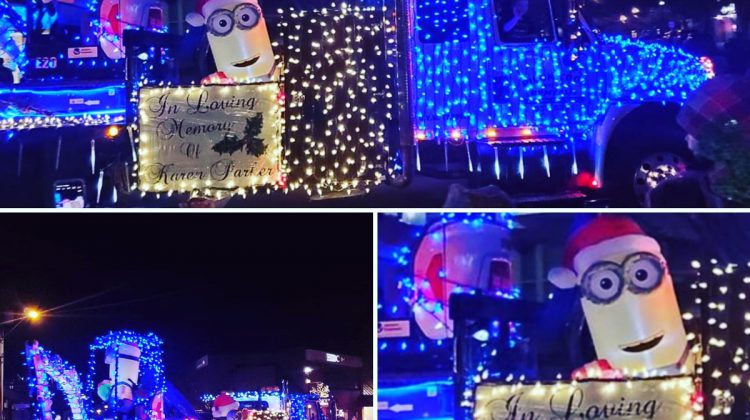 The Comox Valley Christmas Light Trucks are back for another year. (Supplied by Billy Brimacombe)

The Comox Valley Christmas Light Trucks are on a roll.

The Pilon Tool Rentals trucks are cruising around the valley, spreading Christmas cheer and picking up donations along the way.

Decked  out in Christmas lights, the trucks travel around the Comox Valley and are impossible to miss.

Billy Brimacombe is behind the wheel of one of them.

“If you come wandering out, I’ll stop, and pick up whatever you’ve got, and carry on.”

Brimacombe said the response this year has been really good: “A fair amount of donations started rolling in, and then we had a company in the valley challenge some other companies to step up and we had 10 in one day, come forward. I think we’re a little over three grand (in donations) now.”

The food will be delivered to the local food bank on Dec. 20.

“And then we’ll keep driving around the truck (until) the 23rd, 24th (of December), we’ll see,” Brimacombe said. “Kinda depends on the weather, what it does.”

“It’s a riot, seeing everyone come running out,” he said. “It’s lots of fun.”

From 6:00pm to 8:00pm tonight, they’ll be at parked in Crown Isle for the 5th annual Holiday Resort Walk.

They’ll be cruising around Comox tomorrow.

For more on the trucks and their schedule, visit their Facebook page.