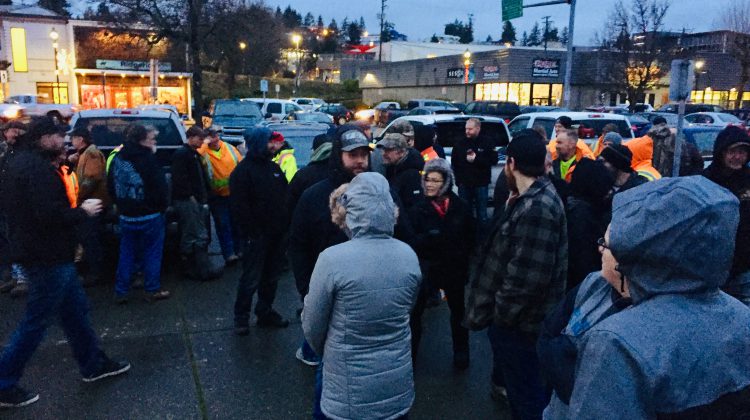 We’re behind the striking forestry workers.

That’s what the organizers of yesterday’s rally and fundraiser at Campbell River’s Robert Ostler Park are saying, after coming under fire from the United Steelworkers union.

Last Saturday, USW  Local 1-1937 warned that the rally “is supported by a group calling itself ‘Taking A Stand,’ which is just a front for contractor owners trying to trick USW members into thinking it is a rally for them.”

The union added that this event was “an underhanded attempt to convince USW members that they should give up their rights and agree to WFP’s last substandard, concession-filled offer.”

During the rally, however, co-organizer Michelle Downey said the group was formed to raise awareness about how important resource jobs are to the North Island and the economy, and how much they value the workers.

She said the rally is to show support for the families that are hurting during the strike that has dragged on for nearly six months.

Downey said there were contractors at the rally, “but a lot of their staff are union workers, as well.”

She said she has a nephew in the industry, with four young children to feed.

“He’s the reason I’m doing this today,” she said. “We’re here to support them and we’re trying to help them with food over the holiday season. Our food will go directly to the union families.”

Among those at the rally were Campbell River city council members including Mayor Andy Adams as well as John Rustad, the Liberal MLA for Nechako Lakes and the opposition critic for forests, lands and natural resource operations.

“This has been a devastating period of time for the North Island (and) for forestry in general in the province,” Rustad said. “We need some big changes. We need to get this strike solved, we need to figure out how we can reduce our cost structure, and, quite frankly, we need to fix the stumpage system.”

Meanwhile, the labour impasse between the union and Western Forest Products is closing in on the half-year mark.