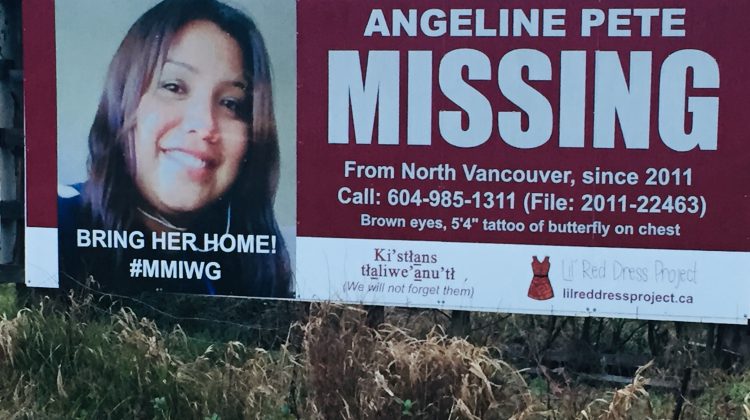 Motorists can see the Angeline Pete sign as they drive south along Highway 19A in Black Creek. (Troy Landreville, Vista Radio staff)

Electronic billboards in Nanoose Bay and a sign in Black Creek serve as a constant reminder that two Indigenous women are missing.

And that Lisa Marie Young and Angeline Pete are not forgotten.

Pete was 29 when she was last seen boarding the SeaBus in North Vancouver in May 2011.

Young was 21 when she disappeared from Nanaimo in the summer of 2002. In the early morning hours of June 30, she left a house party with a man in a red jaguar and hasn’t been seen since. 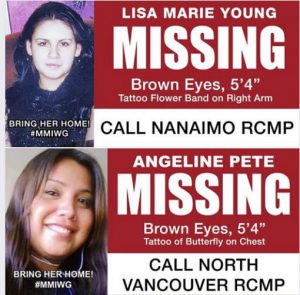 Billboards that are spreading awareness about the disappearance of Lisa Marie Young and Angeline Pete. (Lil’ Red Dress Project, Facebook)

The sign and the three billboards are made possible by the efforts of Jeannine Lindsay and Carla Voyageur of the Comox Valley.

Through the Lil’ Red Dress Project, they lead a group of volunteers who make beaded red dress pins and earrings, to fund signage for missing or murdered indigenous women across Vancouver Island.

The three digital billboards plus the sign will be up for four months at a cost of over $7,000. The sign alone costs $4,500.

Lindsay said they drew inspiration from a decades-old missing person case in the Comox Valley.

Last summer, on the 25th anniversary of her disappearance, her family put up three billboards in the valley, with the hope it would trigger memories and generate tips.

The billboards read ‘Missing 25 years’, ‘Someone Knows Something’ and ‘Call Comox Valley RCMP or Crime Stoppers’.

Lindsay said it seeing the signs last August had a lasting impact on her.

“It was really striking because it was one after another, after another, and it was something that was in the back of our minds,” she said. “We thought, ‘Wow, that’s really impactful,” she said. “We’re part of the Kumugwe Cultural Society here in the Comox Valley and for the last four years, for the first week of October, we’ve helped put up a red dress install in different locations in the valley. And we wanted to do something that would keep this awareness going all year long.”

This sparked the idea of making the beaded red dress pins.

They posted photos of the pins on their Facebook page and they quickly went viral.

“People started asking where they can buy them from, and we decided that we could sell the pins for $20 apiece and all the money can go towards helping families put signage up, because a lot of Indigenous families are marginalized and they wouldn’t be able to raise the funds for something like that.”

Voyageur believes that the signs are helping to make a difference for the families.

“I know that we received a Facebook comment yesterday from somebody who has been actively searching for Lisa Marie Young and she commented that they had always wanted to put up a billboard ad for her,” she said.

“One of the things that really struck us is (that) families probably can’t even afford to photocopy, to put up posters around town. I think that everybody is pretty happy and pretty appreciative.”

Meanwhile, Lindsay said making these earrings and beads takes up much of their free time.

“We both are full-time parents and I’m a student at VIU and Carla is teaching language classes at North Island College, so it’s a side thing for us but in all honesty it’s a daily thing,” she said. “We come home and we’re beading over dinner, we’re beading right before we go to bed, we’ve got an amazing group of volunteers to help out as much as they can, so it’s a daily thing for us.”

In a post on their Lil’ Red Dress Project Facebook page, they thanked their “amazing team of volunteers who continue to support this initiative through beading, sharing and spreading awareness. We also couldn’t have made it this far without all of you supporters out there who have donated, purchased and shared our beadwork.

Lastly we would like to thank Little City Signs, Grant Signs and Coast Outdoors Advertising for their support in this project.”