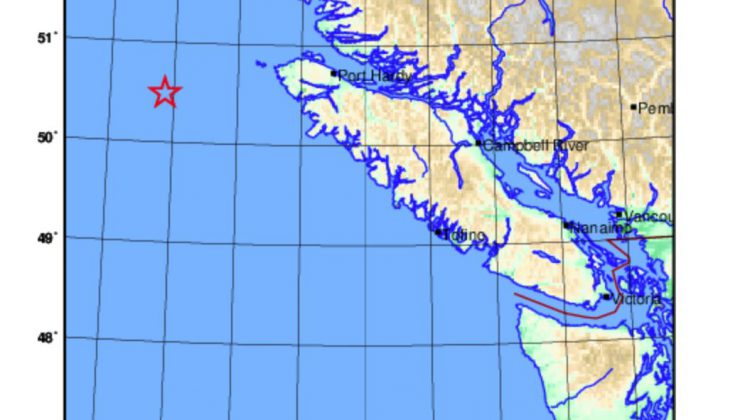 It’s not a matter of if, but when the big one hits the south coast of B.C.

That’s what earthquake seismologist, Alison Bird, is saying, with a whole lot of shaking going on during the Christmas week.

It’s been a busy few days on the earthquake front, with a number of quakes of varying magnitudes happening off the coast of Vancouver Island from Dec. 23 to 25.

The most recent was a 4.9 quake that happened at 12:38pm on Christmas Day, about 200 kilometres west of Port Hardy.

This was considered an aftershock from a 6.2 quake that happened on Christmas Eve in the general vicinity.

That one was felt by people on the northern tip of Vancouver Island, which Bird said “is not surprising, even though it was quite a distance away.”

Bird, who is with Natural Resources Canada, said this kind of earthquake activity is very normal: “We often see earthquakes in this area and often they sort of flare up like this in sort of like a swarm of activity, so you have a lot of earthquakes in a short period of time in the same location.”

She added that these are part of our normal tectonics.

“We have active tectonics all along the west coast of British Columbia,” Bird explained. “So we’ve got the Cascadia subduction zone from about midway down Vancouver Island, down into Northern California, so a lot of people focus on that because that’s the source of the potential ‘big one.’”

Then, she says, there’s the Queen Charlotte transform fault in the north “but between that there are a whole bunch of smaller plates and faults where you get a lot of activity, and that’s where this is happening over the last few days.”

Looking down the road, Bird said the odds are actually quite high that we will experience a major earthquake in our lifetime.

With that in mind, Bird said you have to view earthquakes in the same context as house fires and car accidents.

“These are things that we prepare for,” she said. “We have our smoke detector, we put on our seatbelts, and an earthquake is just another hazard that we have in this region,” she said.

“That’s why we need to prepare for those.”

Bird said the recent earthquakes are not happening in conjunction with the Cascadia subduction zone, so there is not really a link there, but we will have earthquakes in that area.

Earthquakes are ruptures in the crust of the earth and the tectonic plates.

Often, as two plates slide past each other, this causes larger earthquakes. But earthquakes can also happen within the plates because of the stress they are under.

“We see a lot of activity within the North American plate,” Bird said.

“We’re living on top of the North American plate and then also within the subducting Juan de Fuca Plate as it bends and goes beneath us and down into the mantle so earthquakes can happen in both of those plates as well as on the fault between them.”