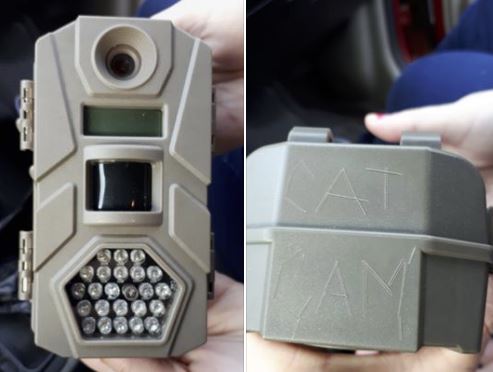 These two cameras, that belong to CATS (Cat Advocates Teaching & Saving Society), were went missing from remote locations in the Comox Valley. (Supplied by Aimee Minor)

A Comox Valley non-profit that rescues lost, relocated, and abandoned cats wants to know where its two cameras are.

The group’s president  Aimee Minor, said they were set up at two different locations in the valley, to help trap cats that have been relocated and/or dumped.

“So angry neighbours trap… their neighbours’ pets and they take them out to these remote locations and they let them go,” Minor said.

“Some of them are very scared and try to forage for food, and others will try to make their way back home if they can.”

Minor said these cats are pets left to fend for themselves in remote areas with no food, water, shelter or protection from predators.

“These cats are not feral cats,” Minor said. “They’re cats that are used to sleeping on somebody’s bed and being in a house when they want to, so that’s what we do.”

These were two of the 10 cameras that CATS has set up across the outskirts of the valley.

“They’re in remote locations where there are no houses around,” Minor said. “It’s basically wooded areas.”

The cats that are found and trapped, are kept in a makeshift intake where they receive vet care with the goal of ultimately reuniting them with their owners.

“We bring them in, and house them in cages and then look for a tattoo or microchip to try to reunite them with their people,” Minor said. “If we can’t find that information, if they don’t have a readable tattoo or they don’t have a tattoo at all, then we 100 percent vet them and then adopt them out.”

Minor said whoever took the cameras will likely have a tough time pawning them.

That’s because they are on the cheaper end of the scale, have been outside in active use for over a year, now, and are marked up for identification.

“There is no resale value in it all, believe me,” Minor said. “They’re older, lower-end cameras. The most you could probably get are for the memory card itself and even those are marked up. All they’re doing is hurting the cats. We use those cameras to see the cats, to know when to go out and trap. And those two locations actually have cats at both those locations, right now.”

“Everything impacts us when it comes down to money being taken from us because now we have to go out and purchase new cameras, and each camera has an SD card (a memory card) so we have to purchase another memory card for the camera,” she said. “So it all adds up, right?”

CATS is marking its first year of operation next month. It became a registered non-profit in April and just received its charitable status last month.

“So we are actually a non-profit charity,” Minor said.

Minor said willfully hindering people that are trying to rescue animals is on par with harming the animals, themselves.

She said the group is 100 percent volunteer-run, and everything from vet care to food to cameras costs money.

“So we’re always looking for donations, but quite honestly, I just wanted to put it out there so that people would a.) know who we are and what we’re doing, and b.) know that this is not okay.”