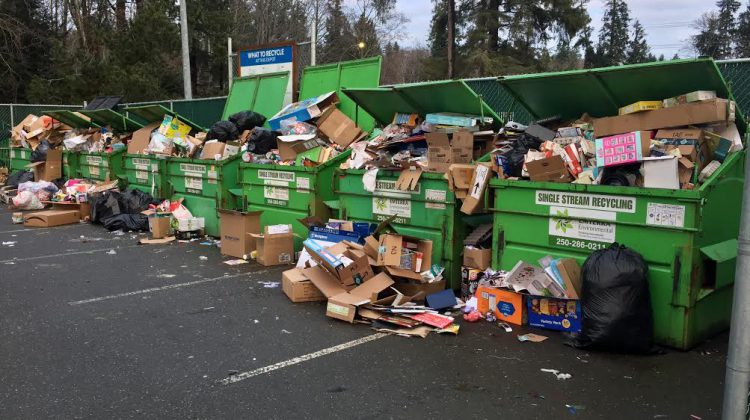 Quite a mess was left at the recycling bins outside of the Campbell River Sportsplex in the days following Christmas. (Troy Landreville, MyComoxValleyNow.com staff)

The post-Christmas mess left at the unsupervised recycling depot outside the Campbell River Sportsplex is an ongoing problem.

This is what Andrew McGifford, the senior manager of Comox Strathcona Waste Management Services, is saying.

In the days after Christmas, clutter spilled out of the bins and onto the cement at the Sportsplex depot.

McGifford said the problem ramps up at this time of the year.

“People are getting more product and there’s more material, we often see an influx at the Christmastime period but it’s an ongoing issue,” he said. “It occurs throughout the year.”

There are six depot sites in the region,

Acceptable materials include most common household paper, plastic and cartons, plus steel and aluminum materials. These depots accept the same materials that are accepted through curbside recycling programs.

These depots do not accept glass, plastic bags and outer wrap or foam packaging.

McGifford said that there are various materials dropped off that “shouldn’t be dropped off,” which could be recyclable at other locations such as the Recycle BC depots.

“Within that site, there are not materials such as plastic film, styrofoam, and glass that are accepted,” McGifford said.

The CSWM board approved the closure of the Campbell River depots: The Strathcona Gardens depot in July and the Sportsplex depot in July 2021.

This will be going forward next week for consideration.

“The remaining two at Oyster River and Quadra Island will remain in place and we are working towards improvements and changes to make these sites more effective,” McGifford said.

McGifford said there is “a significant cost” associated with these depots.

“We actually have a recommendation to close these depots and push the material to, either curbside or the Recycling BC depots that are present in the communities,” he said.

There is no market for the recycling materials at the depots, thanks in large part to the changes that China has made, according to McGifford.

“The volume of material that we’re able to move is limited and it’s becoming more and more costly because that material has to be pristine when it is shipped over to China in order to be accepted,” he said.

McGifford is talking about recycling material that China has accepted in the past, that contain contaminants.

“That material would actually end up being burned over there, but now they’ve quit that practice,” McGifford. “It’s just a change in what’s accepted in the international markets, has made it that much more costly to make sure that material that we provide for the contractor is very clean.”

He said removing the bins could be perceived as not providing a service for the public, but “the level of service that’s provided is quite costly and there is no staff there to guide the public.”

“The material has to be pristine when it’s recycled and if it isn’t there’s no market for it and it ends up in the landfill, so it’s very important that we have someone to guide the public there and in order to do that, it would be a very costly undertaking,” McGifford said.

“And for the amount of material that’s recycled at these depots, it would be very costly per tonne.”