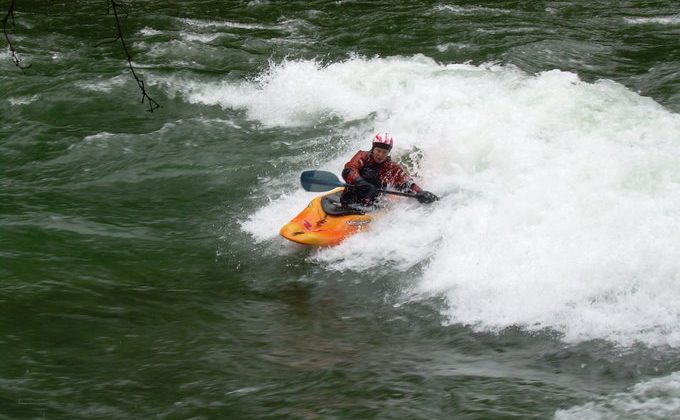 A kayaker navigates the Puntledge River. (Supplied by BC Hydro)

BC Hydro is warning you to steer clear of the Puntledge River this week.

Spokesperson, Stephen Watson, said BC Hydro’s public advisory to stay away from the Puntledge has been extended through to Friday.

It’s mostly because of an atmospheric river that brought a deluge of rain to the central island over the past few days.

He added that since Dec. 31, we’ve had a series of Pacific storms, bringing with them rain and warmer temperatures.

“So what’s happened is the Comox Lake reservoir has had quite a bit of rain in terms of water flows into the reservoir,” he said. “January’s, to date, is about 170 percent of normal for rainfall. So we’ve been releasing water since around Jan. 1st, 2nd, and we’ve advised people to stay away from the Puntledge River system.”

The warning is in place for at least the next couple days.

There is no downstream flood risk at this time, according to Watson.

Watson said this is the first time that BC Hydro has released water for flood-risk management in almost a year.

“We didn’t send any water in the fall; it was a very dry fall for us so it’s nice to see some rain,” he said. “But now the reservoir essentially is full and allows us to generate some power, particularly in the week ahead, when we’ve (got) some cold temperatures and customer demand will be going up, so that timing’s good.”

The silver lining, Watson said, is that some expert kayakers are testing their skills on the fast-moving waters.

“It’s an example where a water-use interest can take advantage of the conditions,” he said.

For everyone else, though, Watson warned that there are some elements of the river that’s bedrock, and it only takes 20 to 30 centimetres of water to knock an adult down with high flows.

“So it doesn’t take much to knock you down and you can get caught up in it,” Watson said.