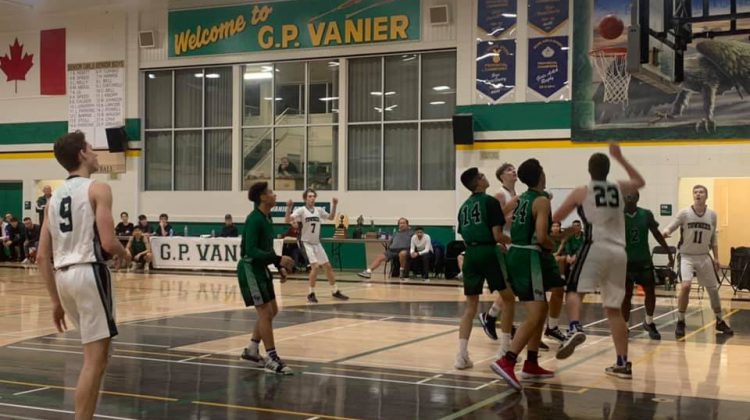 The G.P Vanier Senior Boys Towhees walked away with a 78-75 win to take home the title of Champion Saturday night( Taken by Jen, MyComoxValleyNow.com staff)

It took place over the weekend in the Comox Valley and brought teams from Victoria, Nanaimo and Surrey.

12 teams were supposed to take part in the friendly tournament but ferry cancellations caused two of them to miss out.

Head Coach Larry Street says the local support for the Towhees was great to see.

“We’ve always had good support here, there’s good community appreciation for basketball and even our home games we seem to get good crowds. Lots of alumni and community people who like basketball, it’s always been good. For all four of our games, we played this weekend we almost had a packed house.”

“I’m so impressed every year with community support, all the businesses that get involved, all the parents who get so involved, our refs, are fantastic. Just a great community event and great support.”

The senior boys played four games overall and by the semi-final match up Coach Street says it was tough competition.

“In the semi-final, we played North Surrey, another 4A school that gave us a great game. We had control for most of the game but they kept plugging away and they hit some 3s late to make it even closer but it was a good win in front of a big crowd.”

The final game was against Guildford Park Secondary, also from Surrey, and currently sits 10th in the Triple-A standings. The Towhees won that games by a very close margin, 78-75.

Coach Street says despite G.P Vanier hosting the tournament, the team doesn’t win all that often.