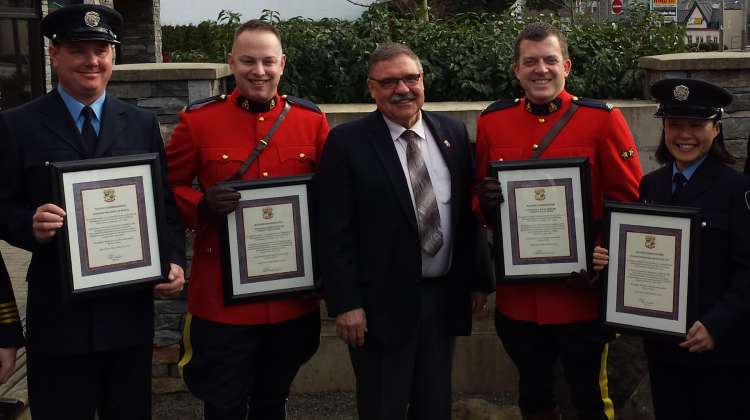 On that day, 7-month-old baby Grant Weaver and his mother Veronika were pulled from the Puntledge River.

Unfortunately, 26-year-old Veronika did not survive.

But baby Grant continues to recover at the Queen Alexandra Centre for Children’s Health in Victoria.

4 individuals have received the Mayor’s Commendation from Courtenay Mayor Larry Jangula, a retired member of the RCMP.

Goat News caught up with the mayor to get his thoughts. He comments on the rarity of the award.

All honourees were at Courtenay council this week to receive the commendations.

Margaret Hamilton says a situation like the one back in January is certainly not an easy day.

Constable Steve Trevor says there were a lot of emotional highs and lows throughout that day.

Mayor Jangula adds that these individuals, and everyone involved, put their lives at risk to save others.

He also comments on the significance of the award.

Constable Wheeler says that it’s nice to receive this honour, but his thoughts are still with the Weaver family.

Overall, it was a team effort. According to firefighter Chris Murdock, everyone deserves recognition for their efforts in the rescue.

Since that day in late January, there’s been immense community support, including a campaign to help raise funds for the Weaver family to cover medical costs and travel expenses.