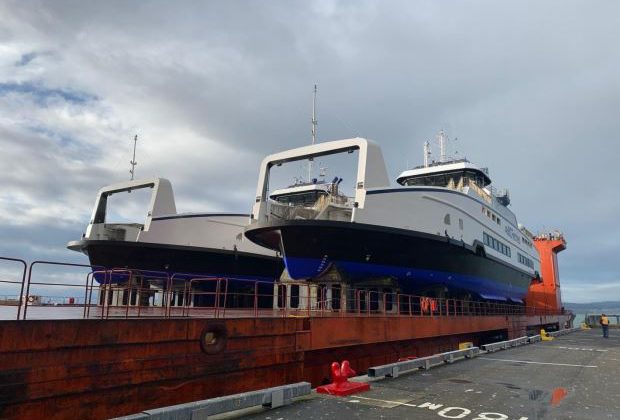 BC Ferries’ new hybrid electric ships are on the move.

The ferries arrived at the Breakwater District at Ogden Point on a semi-submersible transport ship on Jan. 18.

They spent several days there while preparations were made to unload and deliver them to Point Hope Maritime.

BC Ferries will be putting these ships into service on the Powell River–Texada Island, and Port McNeill–Alert Bay–Sointula routes midway through the year.

The company will hold events to celebrate the ferries’ introduction into service with both employees and the communities.

Tomorrow, the vessels will be unloaded from the transport ship, Sun Rise.

It will partially submerge, and the two Island Class ships will be floated off and maneuvered by tugs to Point Hope Maritime.

BC Ferries suggests Esquimalt Lagoon as a viewing point for anyone interested in watching the unloading process, which the company expects will take several hours.

BC Ferries said the Johnson Street Bridge will be raised to accommodate the ships’ move to Point Hope Maritime, and you can view that process from the pedestrian platform by the bridge.

Point Hope Maritime is re-commissioning the ships, as is required following the transport.

This work includes starting up all of the systems and final inspections.

After this is complete, BC Ferries will take ownership of the two ships.

They will then be christened before the company moves on to crew training, ship familiarization and dock fits.

The ships are fitted with hybrid technology that, BC Ferris says, “bridges the gap until shore charging infrastructure and funding becomes available in B.C. From the exterior details to the engines, the design of the new vessels reduces underwater radiated noise, lowers emissions and improves customer service.”