BC Hydro sends warning to steer clear of Campbell River 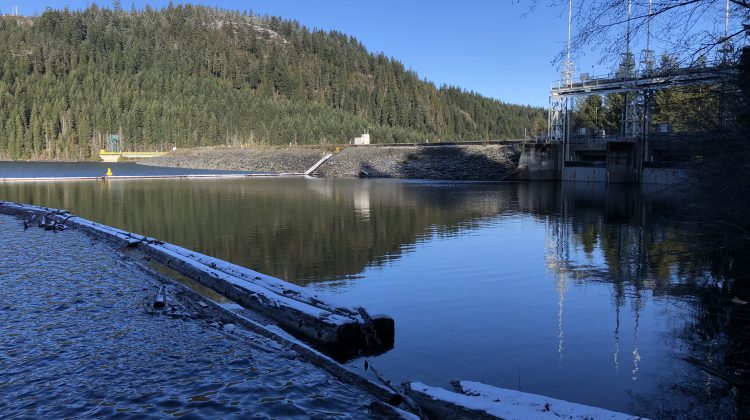 An upstream view of the Strathcona Dam., This photo was taken on Monday, Feb 3. (Supplied by Stephen Watson)

BC Hydro is extending its public safety notification to stay away from the Campbell River.

This is due to the extra water release below the John Hart Dam.

The month of January set a new precipitation record for the upper watershed.

It finished at 189 per cent of average, with precipitation being over 600 mm.

BC Hydro spokesman, Stephen Watson said while the storms were constant, the intensities were moderate, though the last storm of the month was the strongest.

The Jan. 31 storm event with the heavy rain and snowmelt resulted in the hourly inflow into the system peaking at about 1,200 cubic metres per second (m3/s).

Since Jan. 22, BC Hydro has not gone above the 110 m3/s water release down Elk Falls Canyon, and continues to operate the John Hart powerhouse at full capacity with a discharge of about 125 m3/s.

The total Campbell River flow is around 230 m3/s.

“We were fortunate that the wet January took place with the reservoir levels on the low side,” Watson said.

Since the end of December, the Upper Campbell Reservoir/Buttle Lake had come up almost five metres and peaked at about 220.3 metres.

Watson said the 222-metre level “is where we do not want to reach as we would then lose all flood risk management abilities and all water inflows would be passed downstream.”

It is currently at 220.15 metres and slowly dropping.

Watson said that inflows have been receding.

“There is some smaller storm activity though the temperatures are cooler and more seasonal into next week,” he added. “No moderate or higher storms are in the forecast.”

BC Hydro has been able to control the reservoir levels and reduce power generation as needed for the high tides out of consideration for flood risk management, Watson said.

“For downstream fish habitat, while there is always some surface gravel movement, we were able to stay below the flow thresholds in the canyon and the river where significant gravel movement occurs.”

The Lower Campbell Reservoir/McIvor Lake is currently at 177.4 metres and is similar to the level on Jan. 22 when BC Hydro initiated the higher water release through the system.

The plan is to continue with the 100-110 m3/s release down Elk Falls through Wednesday.

Flows will then go back to the 4 m3/s base flow on Thursday.

BC Hydro’s goal is to have the Upper Campbell Reservoir level below 219.5 metres.

The powerhouse will continue to run at full power generation.