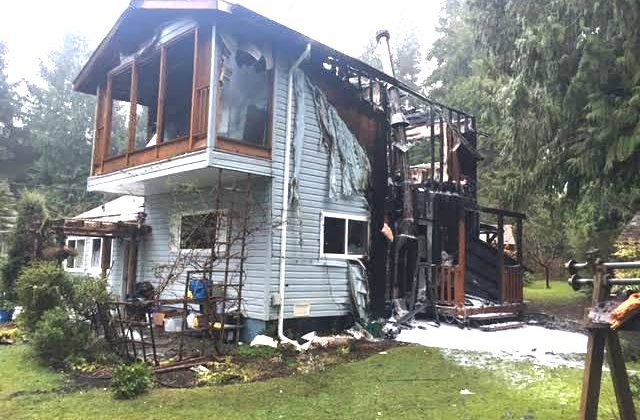 A house on Ships Point Road was badly damaged by an overnight fire. (Supplied by the Ships Bay Volunteer Fire Department)

A Fanny Bay family is left to pick up the pieces after an overnight fire severely damaged their home.

Ships Point Volunteer Fire Department fire chief, Terry Hoffart, said it was initially called in as a chimney fire at 2:10am.

It was quickly upgraded to a structure fire.

“(We) requested our automatic mutual aid with Fanny Bay Fire Department to be activated,” Hoffart said.

Ships Point fire crews arrived at the home on Ships Point Road at roughly 2:15am. Fanny Bay firefighters got there about 10 minutes later.

“The upper level… one side of it was totally engulfed in flames and the back corner was also engulfed in flames, the roof was essentially burning through, so we managed to knock that down, control it and make sure it didn’t go anywhere,” Hoffart said.

“Once we got it under control we pushed in from the other side to attack the fire and we managed to get it out and save about half the house. The other half is pretty well totally destroyed.”

A family of four, including two adults and two children, along with their three pets got out of the house safely.

“We managed to get one of the cats out, the other one got out on its own, and the dog accompanied the family out, so it was a good end,” Hoffart said.

“We had a pretty good turnout and we ended up needing them all because it went on for quite a while,” Hoffart said.

Fanny Bay firefighters left at about 5:30am which is when the Ships Point crews transitioned to overhaul, to knock it down.

Hoffart said the initial assessment was that the fire started in the chimney.

He added that it will be up to adjusters as to whether or not the house is salvageable.

“One half of it might be,” he said. “The other half is totally destroyed and the lower level is intact but (with) a lot of water damage.”

Hoffart was told by the homeowner that they had house insurance.