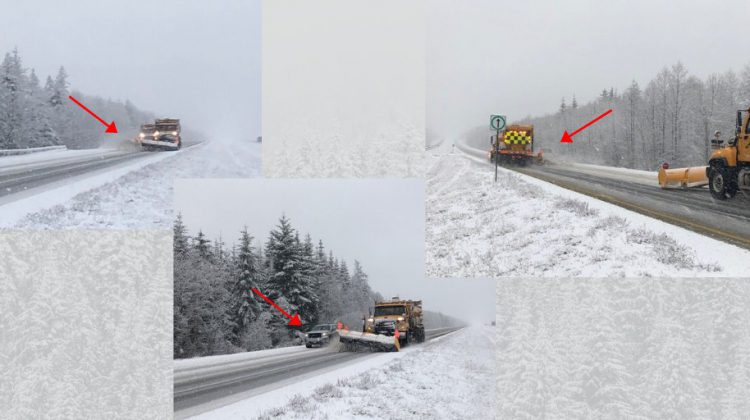 It’s an example of how not to drive in snowy conditions.

The truck passed the lead plow, which had its wing plow down, on the right.

“It does happen a lot more frequently than what we’d like to see,” Bohmer said. “Probably every snowstorm I would say we would have three or four incidents every snowfall in this area.”

“We’re constantly trying to get the message out for people to be careful, slow down, and to try not to pass plow trucks on the right,” he said.

Bohmer said patience is the key when you’re driving behind plows.

“We do instruct (our drivers) to, whenever there’s a chance once you get to a wide area or the next intersection, or we get traffic following us for any length of time, we will pull over and let people by,” he said.

“So we like to promote that people, if they’re just a little bit patient, they can get by safely rather than putting themselves and our drivers and possibly other road users in danger.”

Bohmer said when trucks are plowing in echelon, which is the practice of staggering snowplows across all lanes of a road in one direction, there is “quite a pile of snow” coming off the blades.

He added that it makes visibility limited, “both from our drivers’ point of view but also that person to drive in between those plows, I don’t know that they would even see that we had a wing plow down until you’re right upon it. It’s pretty poor visibility to be doing that.”

The plows, which are tandem axle dump trucks equipped with front and side wing snow plows, are very well marked, Bohmer said: “They have flashing lights all over them and giant signage on the back.”

The Ministry of Transportation says you should give plow trucks plenty of space – about 10 car lengths.

Salt and winter abrasives, as well as rocks and other debris in the snow, can fly – hitting nearby vehicles and reducing visibility.

The ministry adds that tailgating any vehicle puts you at risk of a collision; tailgating a piece of heavy equipment armed with plows makes the potential consequences worse.